Why is ass rape allowed in US prisons?

Five years ago, a Marmot's Hole regular named KrZ, our resident convicted drug felon, made a point about gang rape that is commonplace in US prisons being an added punishment for drug convictions:

I always thought KrZ was an intriguing person, and he really seems to have a sensible head on his shoulders — except for the drug selling. Anyway, the type of thing he describes has long been one big reason I lean toward drug decriminalization (favoring, for now, treatment instead of prison, and possibly full legalization). 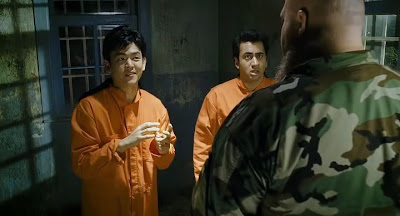 Indeed, a lot of people in America seem to treat prison rape as just desserts deserts for whatever crime you committed, and it's a staple of late-night comedy. Me, I think it's horrifying and cruel to subject even criminals to frequent and inescapable sexual assault, and it's encouraging that some are starting to bring this to light as the serious problem it really is.


Prison rape is an uncomfortable subject rarely covered in newspapers, a laugh line on late-night television. But the reality is that rape in our prisons is a national scandal. A study by the Bureau of Justice Statistics in 2007 found that more than 60,000 adult inmates and -- even worse -- 1 in 8 juveniles in custody had been sexually assaulted in the previous year.

Nearly a year ago, the National Prison Rape Elimination Commission issued a strong report on the scope of the problem and what must be done to address it. But for its proposed reforms to be implemented, we must overcome the inertia and resistance to change within our prison system. Efforts to set standards for prison officials and establish the means to hold them accountable for ending prison rape remain bottled up in the Justice Department bureaucracy.

Atty. Gen. Eric H. Holder Jr. is committed to ending prison rape. But instead of taking immediate action, he is allowing bureaucrats to spend another year redoing the work already completed by the Prison Rape Commission. Meanwhile, more adults and juveniles in our prisons will be sexually assaulted.

Unfortunately for the incarcerated, complaints that this could go on for another year are more likely to be met with tiny violins than a call to action. But action needs to be taken:


The standards proposed by the [Prison Rape Commission] are straightforward. They require, for example, assessing which inmates are more vulnerable to being raped, and they call for isolating likely predators. Because guards also commit sexual assaults, the report called for pat-downs and strip searches to be conducted by an officer of the same sex, except in exigent circumstances. It also called for each rape be treated as a crime. You would think prison administrators would not have to be told such a thing.

This is indeed a national shame. Prisoners are people — people who we do not want as damaged souls living amongst us once they are released. Being raped was not part of anybody's sentence, and we should stop treating it like an "Oh, well, you shouldn't have done the crime then" kind of issue.

Email ThisBlogThis!Share to TwitterShare to FacebookShare to Pinterest
Labels: crime