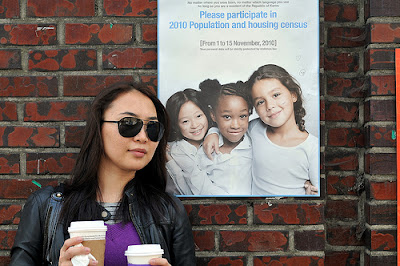 Though The Marmot's not a big fan of the multi-culti view ("This is Korea! Speak Korean!" he might say, though I don't recall him saying it quite like that), he has an interesting post on South Koreans' strong acceptance of multiculturalism (in surveys, at least).

By the way, that's The Marmotess in that picture up above, highlighting the government's plea that everyone participate in the twice-a-decade nationwide Population and Housing Census. I don't remember what happened in 2000, but in 2005 the authorities went all out to be as inclusive as possible, even sending out bilingual census takers who could conduct their survey in English, Japanese, Chinese, Vietnamese, French, etc.

I'm partial to the ROK's census for two reasons. First, I do use their data quite a bit in my own research. Second, having worked for the US Census Bureau this year (see here, here, and here), I feel for those folks who are just trying to do their job, and probably for a lot less than $17 per hour.

Email ThisBlogThis!Share to TwitterShare to FacebookShare to Pinterest
Labels: Census, multiculturalism in Korea