4 hours and 15 minutes with a tailwind 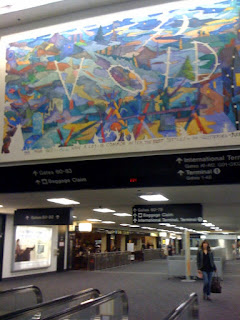 That's how long it took for the 2400 miles as a crow flies between Honolulu and San Fran. Now I'm here at 6:30, half an hour early for an arrival that was too early for anyone to help get me home anyway.
I can usually sleep on red-eye flights, but I was sandwiched between two largeish and smellyish people who wernt content with just the extra space they had on their respective sides.

At least I had Zooey Deschanel to keep me entertained in my sleepless in economy state.

Now if only there were a McD's in this airport. And why are Bay Area people so self-loathing?