LAT on landmines in South Korea 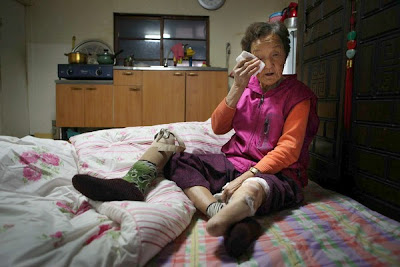 [above: Eighty-four-year-old Park Choonyoung, who not only lost her legs to a landmine in 1967, but also later lost a grandson and two sons.]

The Los Angeles Times has a piece on the profusion of land mines in the area along the DMZ, which still present a hazard to local residents. An excerpt:


Countless land mines planted here, she says, have wreaked an incredible personal toll: The petite 84-year-old widow lost two sons and a grandson to explosions after they accidentally detonated mines while walking in the dense woods outside town.

About four decades ago, Park also stepped on a mine in a farm field. Now she limps about on a recently fitted prosthesis that cuts into her swollen flesh, raising raw and bloody welts.

"I'm old now, my withered leg is getting skinnier," she said, wiping away tears as she huddled beneath a blanket on the floor of her one-room hovel. "It's getting so cold. My leg hurts when it's cold."

Just half a mile south of the demilitarized zone that separates North and South Korea, this isolated farming community of 1,400 residents has become a realm of the walking wounded.

Perhaps tens of thousands of land mines -- menacing reminders of the Korean War half a century ago -- still litter the picturesque valley of birch treesand terraced fields, which is known as "the punch bowl" for its sloping, concave shape.


As I noted here, the ROK government is stepping up efforts for land mine removal, even as land mines within the DMZ are seen as a strategic necessity for slowing down any possible invasion by the North:


In the operations that lasted from April to November, the Joint Chiefs of Staff (JCS) mobilized 3,300 personnel to remove mines from a total of 100,000 square meters of land south of the Demilitarized Zone (DMZ), it said in a release. Since starting the operations in 1999, JCS has cleared 65,000 mines.

"It was a rewarding operation as we moved carefully not to disrupt the natural environment of the areas we cleared," Maj. Jeong Heon-min, operation chief, was quoted as saying. Land mines pose a threat to civilians working in remote areas near the DMZ, especially farmers.

JCS said it plans to clear 140,000 square meters of land next year. The areas covered this year included Yeoncheon-gun on the west and Goseong-gun on the east. Both abut the military demarcation line with North Korea.


Much of this new effort is due to a realization that the DMZ-adjacent parts of the country, long seen as undevelopable or unusable because of its dangerous proximity to the North, is now being eyed for development as towns or green areas. But sadly for some, this effort comes years too late.