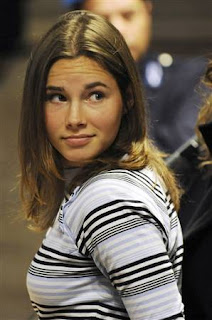 I am not exploiting the current comment-less status of The Marmot's Hole, but if the traffic I've gotten today is any indication (people googling "Marmot comments" have finally toppled "Amanda Knox nude photos" for the #1 spot), there may be some spleens that need venting. Or at least some thoughts that need ruminating.

So here is my first and possibly last "Open Thread." The torch has been passed to a new generation of, uh, K-blog people. My experiment with open threads will probably go no longer than Marmot's own recess from reading comments, which I'm analogizing to a blackout of the Olympics during a world war.

If it ever got 12°F in Orange County, half the population would die. Literally. They’d be fooled by the clear, sunny weather that would necessarily accompany any situation where it gets below freezing in the OC, and they’d just die where they stand, wearing short sleeves and a windbreaker, shivering too much to walk in a coordinated fashion. 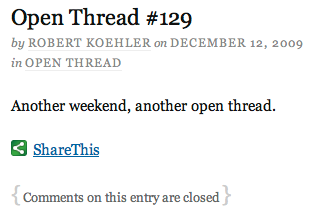 Email ThisBlogThis!Share to TwitterShare to FacebookShare to Pinterest
Labels: K-blogosphere, The Marmot's Hole