Daily Kor for December 25, 2009: Peacekeeping on Earth, bad will beyond the Tumen 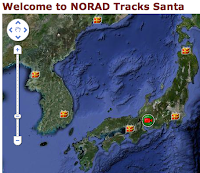 I dozed off while tracking Santa via NORAD, so this is me getting up the next morning to finish the news report I should have done about seven or eight hours ago. Nothing has actually changed: Japanese textbooks are still removing the claim to Tokto but speaking euphemistically about territorial claims (which, to be fair, includes things other than Tokto). A step in the right direction for good relations, I suppose. And other stuff, too, but none of it really comes together for a Yuletide theme.

Email ThisBlogThis!Share to TwitterShare to FacebookShare to Pinterest
Labels: Christmas