Loads of North Korean news today, which is ironic considering that perhaps the biggest thing happening in North Korea — the talks between Washington envoy Stephen Bosworth and whomever he's supposed to meet in Pyongyang — are virtually shutting out the press. And that means either tough talk is being made or ugly deals are being brokered. I hope it's the former. 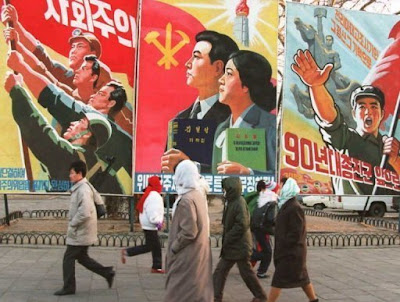 Anyhoo, I've begun to wonder if the H1N1 outbreak in North Korea will end up being another exacerbating factor in Pyongyang's efforts to maintain control following the highly unpopular currency revaluation and the dissent it has apparently caused. Rumors spread faster than rationality, and the factor of speed can go up when people feel vulnerable and that their lives are at stake. What would happen if people knew that the Pyongyang regime was hoarding Tamiflu for itself and not for the people, especially if a weakened and unvaccinated populace started getting H1N1 infections — and dying — in numbers similar to or greater than what we saw in Mexico?

Certainly I don't wish death and suffering on innocent people like that, but I wonder how perceptions of a real or imagined super-pandemic (accompanied by actual deaths) would change the calculus between being more likely to die if you do nothing than if you do something.