For one brief shining moment...

... the Wonder Girls were the most googled thing at Google: #1, as in Numero Uno (Una? Unas?). This followed their appearance (which I did not see) on Fox TV's "So You Think You Can Dance."

Unfortunately, by the time I read this at the  Joongang Ilbo site, they had dropped from the #1 Google search to #3, as you can see below. Which is still pretty damn respectable. 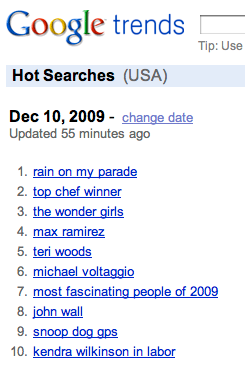 Kendra Wilkinson in labor?! Who the hell would want to see that?! And "rain on my parade" at #1? Could that be our buddy Bi?

Now, if you're a regular at any K-blog, the obvious thought in your mind (even if you aren't the one who put the notion there) is that this is 1000만 Korean netizens at 1000만 keyboards trying to either write Shakespeare or get Korean artists, actors, performers at the top of every list imaginable. 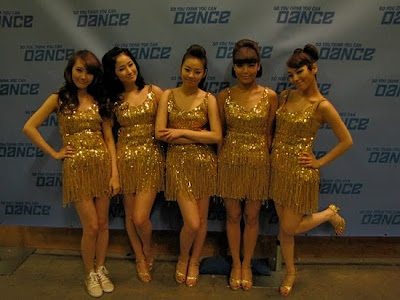 And why not? They are so adorable.

And maybe, just maybe, Ma and Pa America also thought they were so adorable (and so did Ma and Pa Canada living within a hundred clicks of the 49th parallel) that they just had to look them up.

Maybe, just maybe, the rise of the Wonder Girls (or Rain, for that matter), isn't a Korean new media-generated pipe dream after all.

UPDATE:
Several hours later now, I checked again and they're at #9. In other words, they're sinking faster than a kisaeng tied to a general. A look at another chart may show what's at work here:

Almost zero interest in the Wonder Girls until 5 p.m., Hawaii time, which corresponds to late prime-time viewing (i.e., "So You Think You Can Dance") in the Eastern and Central Time Zones. The next peak, three hours later, is the same show in the Pacific Time Zone.

Now that everyone has gone to bed, activity has mostly died down, except for insomniacs, angry loners, and the unemployable. As water cooler talk tomorrow (er... later today) turns to the show and the South Korean quintuplet of cuties, expect another mini-spike.

Well, now fourteen hours later, the Wonder Girls are off the charts, but not in the good, idiomatic way. I just hope their actual rise and fall in America isn't this fast. Damn fickle Americans. If they can't even be bothered to stick to a war until it's finished, what hope do the Wonder Girls have of popularity that lasts until the next morning.