Daily Kor for December 8, 2009: Just lie back and think of Kim Jong-il

The big news in South Korea, I guess, is the trip to the Free Korea by the premier of Canada, Stephen Harper. That is, if the visit by the leader of a country with fewer people than one of the larger US states is that big a deal to begin with. I mean, come on, South Korea has 50% more people than Canada does, and South Korea's so small you could sprint across the country in an afternoon. I mean literal sprinting. Phht... When is America finally going to put that "country" out of its misery and just annex it give it statehood. Really, now that Obamacare is being passed, the only real obstacle to reunification of the former American colonies is about to be history.

But perhaps the big news for the Koreas in general is the smoky room grilling of North Korea's UN Ambassador Ri Tcheul, who had to answer for his country's abysmal human rights abuses. The guy was totally unprepared; at one point it appeared he thought crossing his legs to reveal he wasn't wearing underwear would be enough to distract from his country's murderous ways.

In all seriousness, at one point he said that the families of condemned prisoners were the ones requesting public execution. Scumbag. 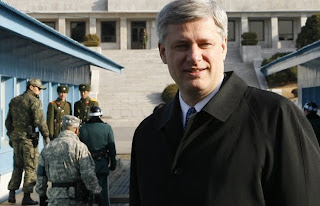 [above: Though he also spent at least a minute or so inside DPRK territory, Canadian PM Stephen Harper was not kidnapped, was not forced to eat rice with small stones in it, did not bond with his captors, did not force world leaders to come to his rescue, and did not get $1 publishing deal to write book on tragedy of North Korean defectors whom he endangered by carrying tapes of their interviews with him. On re-entering the South, however, he was forcibly tested for HIV and THC.] 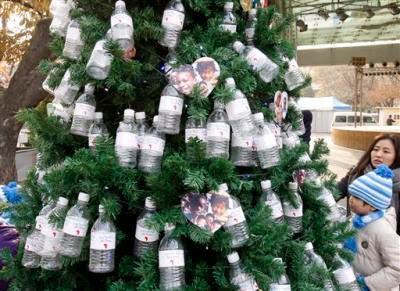