Some two decades after God threatened to kill Oral Roberts, it appears that the Almighty has made good on His word: Oklahoma televangelist Reverend Oral Roberts has been found dead in his Newport Beach home. He was just ninety-one. 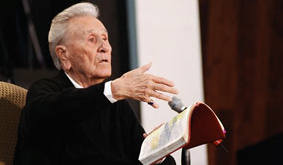 Given that the outspoken faith healer suffered a fall, it may be reasonable to expect foul play. I'm sure Orange County law enforcement will be bringing in God for questioning on his whereabouts. Being omniscient, that gives God motive and opportunity.

God being a loving Creator, I'm sure the likes of Oral Roberts, Jerry Falwell, that homophobic preacher in Colorado who's gay, Jim Bakker, Pat Robertson, et al, piss God off as much as they piss me off as a Christian. Selfish, sanctimonious, Bible-distorting prigs.

When Reverend Roberts called God out, that made God look bad. But it was a perfectly played plan by Preacher Oral: If God really were to take him out, it makes Roberts look like he's a savvy soothsayer of sorts, and that only expands his power and the power of those like him. He'd become like Obiwan Kenobi after Darth Vader whacked him:


You can't win, God. If you strike me down, I shall become more powerful than you could possibly imagine.

Yeah, yeah. I realize I just analogized God as Darth Vader, but me and the Lord are pretty tight, so He knows what I'm getting at.

So God had to wait, bide his time. Wait until everyone but me and Berke Breathed had forgotten all about this little threat Oral revealed to the world. And when no one was looking — the economy's in the crapper and it's Christmas! — he made his move. God or one of his goons (I'm looking your way, Gabriel) gave the old guy a shove.

Yeah, yeah. I realize I just outed God as a killer. But does this come as a surprise to anyone? I mean, if you were omnipotent, wouldn't you smite half the people around you? If this ever goes to trial, just argue against the DNA evidence and hope for an all-Black jury.