If you're an "old-timer," which would be anyone who was in Korea during the last economic meltdown, you might remember the handwringing that ruled the day back when department stores and bridges were collapsing all around us. Fast forward a decade and a half, and can you imagine that Los Angeles would be importing Korea-made trains for safety reasons?

From the Ventura County Star (HT to Wangkon):

The new locomotives and cars were purchased by Metrolink, the five-county commuter rail service, and will be equipped with “crash energy management” technology designed to better absorb the impact of rail collisions.

“These cars will save lives,” said Moorpark City Councilman Keith Millhouse, chairman of the Metrolink board of directors, at a news conference announcing the technology. Metrolink also used the event to introduce Eric Haley as the regional agency’s new interim chief executive officer.

Built in South Korea by Hyundai Rotem, the first two pilot cars are expected to arrive in California in late January. After being shipped by sea, they will be reassembled in San Bernardino and tested before the 117 cars ordered are put in service, officials said.

“We have too much at stake to not get it right the first time,” Millhouse said. He said Metrolink hoped to create jobs by negotiating with Hyundai Rotem to reassemble the remaining cars in Southern California.

The deal for the new cars was already in the works before the September 2008 collision of a freight train and a Metrolink train bound for Ventura County. The collision in Chatsworth killed 25 people and injured more than 100. 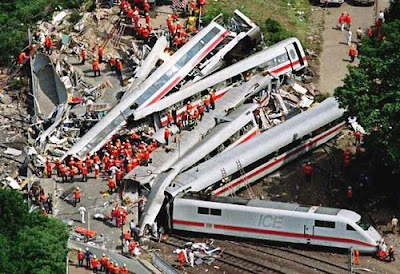 This is great news for Hyundai, and it shows how far things have come for Korean manufacturing. Even better, if the trains do break down or fail to perform as expected, Hyundai has that "Assembled-in-San-Bernardino" deniability!

Wangkon, who sent me the link to this (is there a moratorium on Marmot's Hole guest bloggers posting, too?) made this comment about the story (reprinted with permission):


When I was taking the train in my childhood to the shigol to visit my grandparents…. Never in a million years did I think Korea would SELL trains to America…. Never. What I thought was… what a shithole backwards country my parents dragged me to…


True that. I remember the old 비둘기 trains and the Diesel-powered things that chugged along the Yongsan-Ch'ŏngnyangni route that ran parallel to the river's edge. Now we have KTX bullet trains and commuter trains that are top-of-the-line enough to be exported to California.

Actually, when I first saw this story, I was thinking these were the new driver-less trains. And the idea that the only way to make the trains safer in Korea was by taking Korean drivers out of them... well, there was an obvious joke in there somewhere.