Kim Jong-il is king of the mole people

I don't know what to make of 86-year-old Hwang Jang-yop, the former secretary of the North Korean Workers Party who in the late 1990s became the highest ranking North Korean defector ever. Since then he has joined conservative forces in condemning anything and everything in the Kim Jong-il regime, along with anyone in the South who is willing to do business with them. 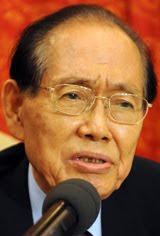 I used to feel automatic loathing for the man. If things were so godawful terrible as you say they are (and I believe they were), why didn't you do something then? I mean, why go and be the architect of much of the horror you now condemn?

On the other hand, I sometimes wonder if defecting and then revealing all to his handlers in the South was his way of undermining the system that he finally saw as evil beyond imagination.

However I may feel about him (and it's the first impression that dominates; I think he has a lot of bad karma to make up for), he's worth paying attention to. He's a guy who knows where all the bodies are buried because, well, he's one of the people who put them in the ground.

And speaking of putting things in the ground, Mr Hwang told Seoul-based Free North Korea Radio about a network of underground tunnels hundreds of meters below the surface (that's hundreds of yards for those of you from Rio Linda) that are designed as an escape route for the Dear Leader. Should something like, say, disgruntled people who have lost their means of survival decide to storm the palace gates. [UPDATE: The BBC also has the story.]

The tunnels are designed to spirit Kim Jong-il away to safety in places like Mt Chamosan or Mt Myohyangsan, dozens of kilometers away from Pyongyang. They reportedly have clean spring water and even green grass.

Mr Hwang is not retelling some hearsay, apparently. He says he has seen some of the tunnels and underground facilities beneath the capital. If only one of them led to The Hague.