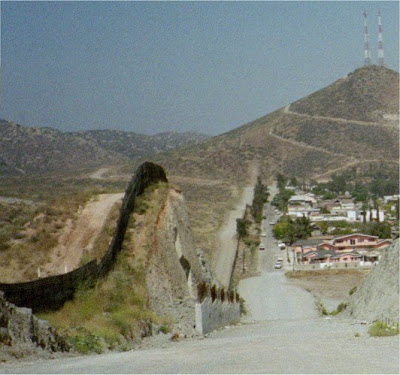 I like subject titles with question marks: it allows you to insert something potentially incendiary but without owning it and taking responsibility for it. A cop-out really. But that's not why I like them. I like them because it allows me to explore a thought or an opinion that I don't (yet) fully hold. And when it comes to US border enforcement and illegal immigration, we're entering territory where I'm not sure what I believe.

This little mini-rumination is triggered by the news today that drone aircraft will be used to patrol the border between Mexico's Baja California and the US's Alta California (i.e., the State of California).

That's right, the same unmanned aircraft used to hunt down terrorists and Taliban in Afghanistan and (I believe) Pakistan will be hunting for "illegals" along the imaginary line that starts between San Diego and Tijuana and stretches eastward to the Colorado River:


The drone, which will be unveiled later today, will be operated out of the Antelope Valley by the military contractor General Atomics. The drones will fly above the border region with advancing electronic tracking equipment looking for illegal immigrants crossing into California.

According to the San Diego-based company, the drones will transmit information to U.S. authorities on human smuggles as well drug smuggling.

Such drones are already used on the border of Texas and Arizona.

Border Patrol officials told SignOn San Diego that the drone would initially be used to monitor ocean area, which has been used by human smugglers.


"Initially"? I smell an escalation.

Okay, but snarkiness aside, I'm not so sure I oppose this. Just as I feel no qualms about South Korea enforcing laws to prevent people working on tourist visas or otherwise violating the terms of their temporary work visas (in an ethical and lawful manner, that is), I don't mind if the US is doing what is legal and ethical to enforce its own borders. In fact, it's maybe time to step up that enforcement so that we can start getting things toward a normalcy where those who have been in the US for some time get "amnesty" and then we can all go back to square one.

I, for one, would like to see universal health care that includes all within US borders, and that includes illegals. But for that to work, we need to have as few illegals as possible. Sort of a catch-22 there. So maybe we need the drones, along with heavy penalties for Americans who employ undocumented workers. I don't know. Hence the question mark.

And this is also why I asked, in an earlier thread in response to what was seen as heavy-handed treatment of undocumented workers in South Korea, what the ROK authorities should do about it. I guess one of the points I'd like to make about that is that it's easy to sit at the sidelines and snipe about what the authorities are doing wrong, but it's an entirely different process to suggest or develop workable policies.

So just what should those policies be, and should they include drone aircraft as if Tecate were Pakistan?