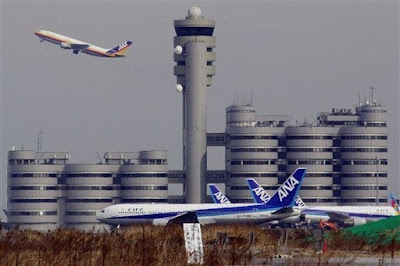 Washington and Tokyo have agreed to liberalize their civil aviation markets in a deal that may mean far more flights and far fewer restrictions on markets. Experts believe that will mean more travel opportunities, cheaper transport of cargo, and above all, cheaper passenger flights. Since some of the cheapest routes to the US and Canada from South Korea go through Japan, this could well mean cheaper tickets for those of us who fly in and out of Incheon International Airport and other ROK airfields as well.


The agreement would relax limits on passenger and cargo flights between the two countries. U.S. Transportation Secretary Ray LaHood called it "good news for air travelers and businesses on both sides of the Pacific."

"Once this agreement takes effect, American and Japanese consumers, airlines and economies will enjoy the benefits of competitive pricing and more convenient service," LaHood said.

"I hope Japanese and U.S. aviation industries would actively take advantage of the scheme to provide better service and benefits for passengers and shippers and help promote further development of Japan-U.S. aviation ties," Maehara said in a statement.

The U.S. already has so-called open-skies treaties with about 90 countries, including European Union members and Australia. The agreements are designed to increase competition and cut fares by giving airlines more power to pick routes and set prices.

The U.S.-Japan agreement would give American carriers the chance to expand at Narita Airport outside Tokyo and compete at Haneda Airport near downtown Tokyo, according to the Transportation Department. The deal would replace a 1950s treaty that gives Delta and United more access to Japan than other U.S. carriers.


I personally am tired of paying $900 for travel (usually on Japanese airlines) between Seoul and Honolulu. I had hoped that the visa waiver for ROK nationals visiting the US would mean more Korean Air flights plus new flights on Asiana, but because of the economic collapse, that hasn't happened — yet.