The Dear Leader has made a rare visit to the Rajin-Sonbong Free Trade Zone at the northeastern tip of North Korea.

For North Korea watchers, the real question is what was the Dear Leader doing up along the border, so far from his comfortable power base in Pyongyang?

Are his handlers hoping that the bitter cold of the coldest part of North Korea during one of the coldest times of the year would cause irreparable harm to his already fragile health?

Are things so bad in North Korea that even the Dear Leader is plotting his own escape?

The KCNA report offers little to go one:


"It is very important to abide by the principle of the credit-first policy in foreign trade," Kim was quoted as saying by the Korean Central News Agency. He ordered workers to strictly observe "export discipline and improve the quality of goods".

The leader toured a general marine products factory, a stock-breeding farm, a wine factory and other sites at the Rason Taehung Trading Company to acquaint himself with the production of export goods, the agency said.


Really, that could be a cover for anything. 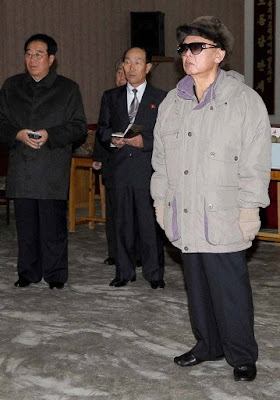 [above: The caption of a KCNA-released photo says the Dear Leader visits a cooperative farm. I think "cooperative farm" means the animals don't bleat so loud when you slaughter them.]