This is the story from Reuters, in its entirety:


A U.S. human rights activist trying to raise global attention about the suffering of the North Korean people has crossed into the reclusive state, other activists and South Korean media said on Saturday. 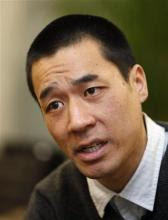 There has been no comment from North Korea, which usually arrests foreign border crossers on site, or from U.S. officials.

Activists told Reuters that Robert Park, 28, had crossed into North Korea from China on Friday, while South Korea's Yonhap news agency and the Kukmin Ilbo newspaper quoted activists who went with him to the border as saying he had crossed at a sparsely patrolled point near the northeast border city of Hoeryong.

Park was quoted by activists who went with the border as shouting when he went across: "I am an American citizen. I am bringing God's love. God loves you."

The activists asked not to be named due to security concerns.

Park told to Reuters in Seoul earlier this week that he saw it as his duty as a Christian to make the journey and did not want the U.S. government to try to free him.

"I don't want President Obama to come and pay to get me out. But I want the North Korean people to be free," Park said on Wednesday before departing for China.

"Until the concentration camps are liberated, I do not want to come out. If I have to die with them, I will. (For) these innocent men, women and children, as Christians, we need to take the cross for them. The cross means that we sacrifice our lives for the redemption of others," he said.

Western governments and human rights activists say North Korea maintains a network of political prisons to crush the possibility of dissent where brutality is the norm and deaths are commonplace.

The North uses unlawful and arbitrary killings and stages public executions to intimidate the masses, critics say. They say it prevents free speech, controls all media and crushes nascent attempts at reform by executing or imprisoning those who oppose the state.

Park, a Korean-American, has joined various campaigns calling on North Korea to improve its rights record and said he would carry a message calling for leader Kim Jong-il to step down, the closure of prison camps and compensation paid to victims.

Park said he wanted to be arrested in order to pressure governments including the United States, South Korea and Japan to address the suffering of the North Korean people.

"Through the media and through sacrifice we are looking for the global leaders to be forced to give an account. There is no excuse," he said.

Earlier this year, former U.S. President Bill Clinton made a high-profile journey to North Korea to win the release of two U.S. journalists who were held by the state for about four months for suspected illegal entry.

The journalists, Euna Lee and Laura Ling, of U.S. media outlet Current TV, were arrested in March working on a story near the border between North Korea and China.

The two said they crossed into the North by accident and were taken into custody in China by North Korean guards who chased them back across the border.


UPDATE:
Yonhap also has the story. So does AP.

I originally posted this story in its entirety from Reuters, without any comment. I don't know what to make of such people. On the one hand, they do draw attention to the plight of the people in North Korea, but on the other hand, they seem to only bring crack downs on the areas where they managed to cross over.

This comes at a time when the public in North Korea is on edge over the currency revaluation, and the authorities may be highly sensitive to the influence of outsiders. In the end, is this bringing harm to the people it is intended to help?