Mainstream Korean food in America? Been there, done that.

Over at The Marmot's Hole, iheartblueballs wrote:


I’ve always told Korean friends of mine that the best potential I saw for a mainstream breakthrough for Korean food was something modeled after the simple Kalbi plates you can get in Hawaii. Basically a semi-fast food type of place with a plate of rice, kalbi, and a few side dishes you can pick, all for $7-10. I always stop at several of them for quick lunches whenever I’m over there. The quality of the meat and the marinade of course separates the good from the bad, but the ones that I’ve been to have all been pretty solid, and they’re pretty popular in Hawaii too….always good crowds for lunch at the places I went to anyway.

It would be easy to standardize and franchise, and would be cheap enough to draw far more people than the traditionally expensive Korean bbq places ever will. They could kill in food courts at malls, on college campuses, stadiums and arenas, airports, and just about any place that a Panda Express now thrives in. The challenge would be to make a really great tasting meat that could be kept inexpensive, and to pick enough Korean side dishes that are palatable to the average whitebread. Hell, you could even throw the Korean Taco in there and give people a choice of having the meat with rice or in a tortilla.


Ah, yes. What he says sounds spot on. And ihbb has inspired me, after the winter holiday is over and I return to the Garden Island, to try to track down the heads of Yummy's or Pearl, two Korean "fast food" chains here in Hawaii. Yes, chains. Popular chains. You see, someone has already figured out how to Panda Expressify Korean food. 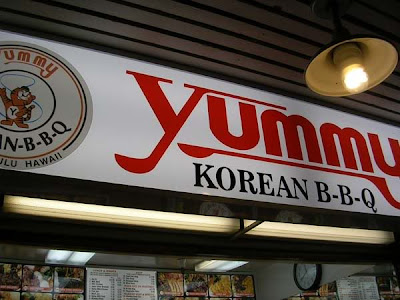