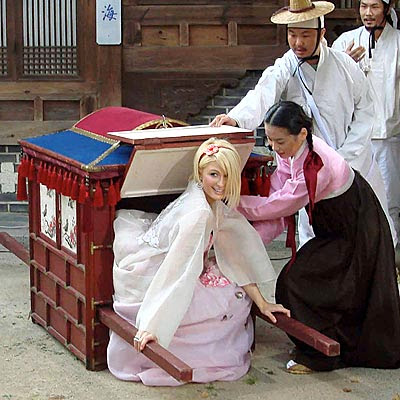 Paris Hilton, vacuous hotel empire heir turned model turned actress, is the next in a series of Hollywood sex kittens (note: we at Monster Island are trying hard to find appropriate euphemisms for slut) falling for Rain. She has apparently tweeted her appreciation for South Korean heartthrob Rain's latest Hollywood outing, Ninja Assassins.

The Korean media is picking up on this by putting two and two together and insisting that, like supermegauberstar Megan Fox, this must mean that Paris Hilton is attracted to Rain, which would affirm the superior sexiness of all Korean men by extension:


New York socialite Paris Hilton would like to see South Korean heartthrob Rain throb in more ways than one. The actress is reportedly attracted to Rain's manly not-gay musculature in the movie Ninja Assassins, which follows the antics of ninjas, which are originally from ancient Korea. We couldn't interview Paris directly, but we think she would have told us, "He is so cute and kind. And the name Rain reminds me of liquid pouring on my face. Very refreshing."


The Korean headline in the same local newspaper read: "Paris Hilton has long liked Korean stuff; would now like to be stuffed by Korean," which was soon changed to "Paris Hilton into Korean things; would like Korean thing to get into her." It now reads "Paris likes Rain," followed by three question marks and a smiley emoticon. The article is next to an on-line ad recruiting a new native English-speaking copy editor. 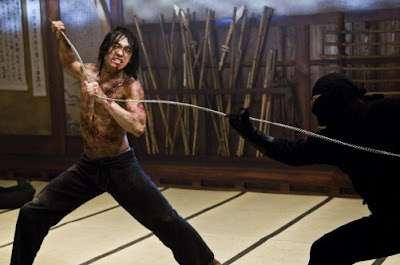 [above: Rain and a ninja friend prepare to snake a really long drain.]