Kim Yuna, how could you?! You were our dream! And now you failed! And in Japan! We throw you in the Hwang Woosuk Memorial Trash Heap of History™. Now we must go back to worshipping foreign-born Hines Ward, who never fails. 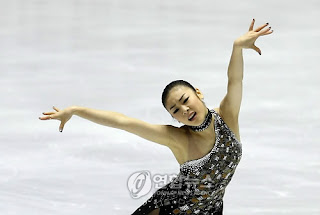 Email ThisBlogThis!Share to TwitterShare to FacebookShare to Pinterest
Labels: The Great Currency Obliteration of 2009, 나쁜 김연아