Oh, darn. I was all set to write up a bunch of stuff on Japanese ruling party chief Ichiro Ozawa's highly conciliatory trip to South Korea (the party of Hatoyama is like the anti-Koizumi when it comes to Korea-Japanese relations, especially on sensitive issues), but I'll have to hold that for a full-blown post, I suppose.

But instead, five North Koreans guys who aren't North Koreans making an emergency landing in Bangkok have stormed the headlines, as their plane full weaponry has been detained and their materiél confiscated. We're talking rocket-propelled grenades, missiles, and other goodies. The question is where they were headed in their rickety old Soviet-era plane. Some authorities are saying they were bound for Pakistan, while others are suggesting Sri Lanka. Don't be surprised if we see some nastiness in the Yellow Sea to distract from this. 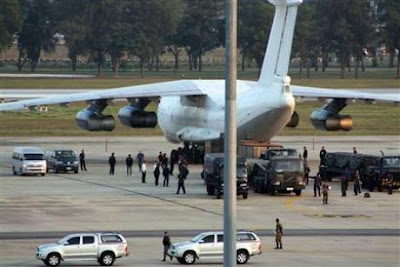