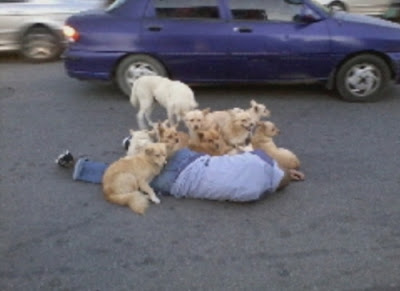 Apparently these dogs gathered around their owner (?) to protect him after he passed out in the street. That guy doesn't deserve those dogs.

My cats used to do this to me when I was sick, but it was because they were demanding to be fed regardless of my condition.

Anyway, I'm not the biggest fan of that site (and I think some of the foreigners taking pictures of Koreans in embarrassing poses can be setting themselves — or BOK's owners — for a nasty little lawsuit), but the puppy puker deserves it.