How did they get it so wrong on Reid? 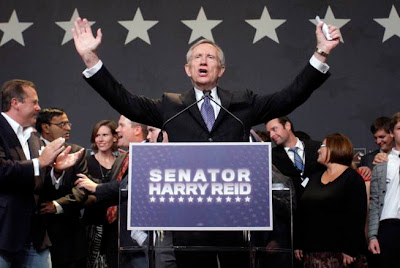 I'm not going to make the case that Senator Harry Reid of Nevada is well-liked, but the pre-Tuesday polling obits of the Senate Majority Leader have taken on an almost "Dewey Defeats Truman" air, even though the guy who was down by three just yesterday went on to win by five percentage points.

This Esquire article — which was written before Tuesday but whose predictions were borne out — may explain what the problem was:


Second, counter to all of the public polls, the internal Reid numbers for the past three weeks show that Reid has actually had a lead ranging from 4 to 8 points (and last week, the National Republican Senate Campaign Committee had a similar internal poll showing Reid six points up). The campaign's rolling-track numbers from last Friday also showed Senator Reid with a six-point lead.

Why are these numbers so different from Rasmussen, Mason-Dixon, et al? Well, first and foremost, Nevada is unlike any other state, in that it has a comparatively transient population, with lots of newcomers, and a sizeable percentage of that population works in the gaming industry — the casinos. Traditional polling firms don't call during the day, and so you miss most of those people, who work in significant numbers at night. And if there was ever a population that communicated with the world exclusively via cell phones as opposed to landlines, this is it. (The Reid campaign has polled cell-phone users aggressively.) The research shows that when you go strictly by the people who you reach on the first try, Reid is 2 points down. But in the subset of people who you reach on the second or third try, Reid leads by 11 points.

None of the public polls reflect this population at all.

There's a bit more to it than that, but this could be one of those cases that could change the face of polling in the future.