I love the smell of pepper spray in the morning 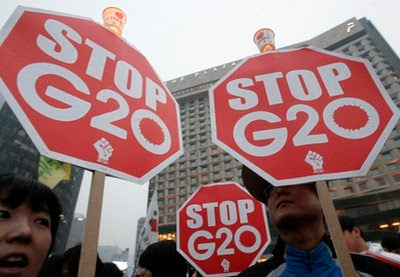 Looks like the G20 summit is the place to be if you're a chinboista activist. They're out in force — twenty thousand according to Canadian Press — and the police have been using tear gas to keep them in line, er, in blob:


Thousands of people chanted anti-globalization slogans in South Korea's capital Sunday to protest this week's Group of 20 summit. Part of the crowd attempted to march down nearby streets but were stopped by riot police, who fired pepper spray.

The protesters sang, danced and waved signs reading "We oppose the G-20" at a large plaza near Seoul City Hall. South Korea is hosting a gathering of leaders from the G-20 advanced and developing economies on Thursday and Friday. 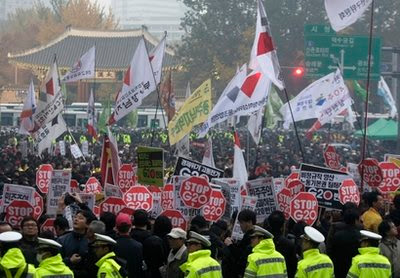 Some protesters danced and played traditional Korean drums, while about 9,000 riot police and many police buses encircled the rally site to keep order. Police said about 20,000 people took part in the rally.

The rally was initially peaceful, but some protesters engaged in minor scuffles with riot police who tried to prevent them from marching through downtown streets. Riot police fired pepper spray at some protesters at the front of the crowd, forcing them back. 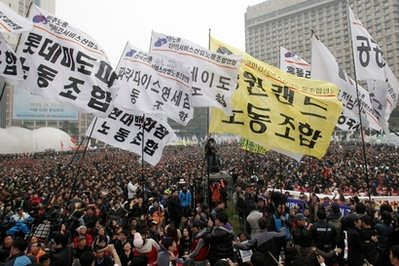 Some of the protestors have legitimate complaints: the powers-that-be that run the G8 and the G20 do have this uncanny ability to make policy that effects the unG179, often with disastrous results for the working man and woman:


The protesters oppose globalization and say the G-20 is not focusing on creating jobs or protecting social programs.

Actually, South Korea has been trying to push the G20 toward more aid and sustainable assistance in poorer countries, so perhaps they'll get a sympathetic ear. Or not. 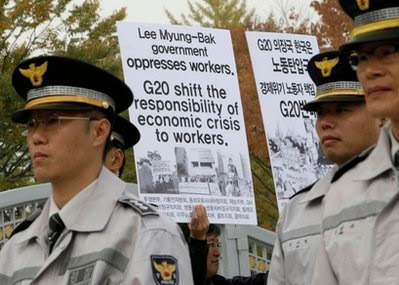 Nonetheless, some of this has the potential to get out of hand. Yesterday we had the denied entry of six activists from the Philippines, and now we have news of a South Korean man making terror threats against various embassies of predominantly Muslim nations:


A South Korean man has been arrested for sending a terror threat against this week's G20 summit to embassies of Muslim nations, police said Sunday.

The man, age 46 and identified only by his surname Kim, was arrested Friday after faxing the threat to the Seoul embassies on Thursday, police said.

The message read: "Hello, Allah's warriors? An event Osama bin Laden likes has been prepared at the G20 summit. We wish that your country will be full of Allah's blessings."

The fax in Korean was sent to the embassies of Saudi Arabia, Indonesia, Pakistan, Afghanistan, the United Arab Emirates, Kuwait, Tunisia and Turkey, police said.

"He will be charged with disruption of business," a spokesman for Seoul city police told AFP.

"It looks like he tried to cause a stir among Muslim countries and unnerve the public ahead of the G20 Summit," the Yonhap news agency quoted a police official as saying.

Naisŭ. Given that these protests tend to follow the G8 and G20 wherever they go, I don't think there is too much loss of face with the presence of all these goombahs. In fact, South Korea seems to be gaining a bit of tangible prestige, as its responsibilities in the International Monetary Fund (which many South Koreans referred to as "I.M. F'ed" just a decade ago) have been upped to 1.8 percent. 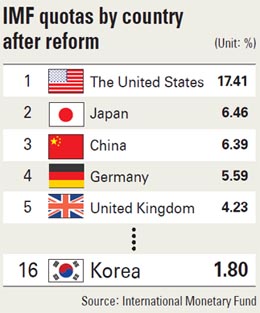