LAT on the self-styled military watchdog in the National Assembly 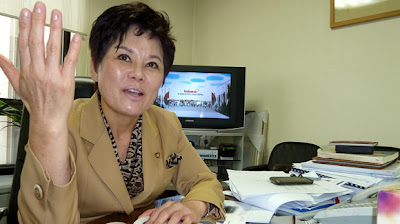 John Glionna of the Los Angeles Times turns his focus on Song Young-sun, the parliamentarian who has made it her mission to scrutinize ROK military spending:


As the cameras whirred and her fellow legislators watched in silence, the petite lawmaker held up Exhibit A: a new pair of combat boots.

The government had just spent $35 million and a decade doing research on the high-tech shoes, which leaked in the rain and quickly shed their heels. As far as Song Young-sun was concerned, they were just the latest example of what was wrong with the South Korean military.

"You're spending billions of dollars to purchase fighter jets, ships and submarines, but the most important thing on your shopping list should be the morale of your soldiers," Song bluntly told military brass summoned to the National Assembly recently for an annual government audit.

"These boots are their personal vehicles for 16 hours a day. If your feet hurt when you walk, you're not a dedicated soldier. And if you generals lose your men, you've already lost the war."

Even in a nation famous for its sharp-elbowed political theater, the performance was memorable. But it was classic Song, a policeman's daughter whose college hero was steely British Prime Minister Margaret Thatcher.

Song, a veteran military analyst who is one of only 41 women among 299 national lawmakers, has unabashedly used her post on the powerful National Defense Committee to help keep the highest-ranking military minds in check, publicly questioning the nation's military readiness in the face of an aggressive North Korea and its million-man army.

It's nice to know someone is watching out for my tax dollars.