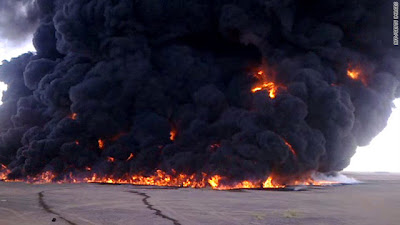 Just days after an apparent Al-Qaeda plot against US-bound cargo planes was foiled, it appears their operatives in Yemen may have struck a ROK-owned oil pipeline.

The explosion caused a leak in the 204-kilometer pipeline operated by the state-owned Korea National Oil Corp. (KNOC) in an oil field in Shabwa province, which produces 10,000 barrels of oil a day, the officials noted. The extent of damage has not yet been confirmed.

Local authorities suspect the explosion was caused by unknown attackers as remains of explosives were found near the site.

Dubai-based Al-Arabiya news reported that Al-Qaeda may have been behind the explosion by possibly planting an explosive device under the pipeline and detonating it from a distance, citing an unidentified Yemeni security official.

According to an AFP report, Al-Qaeda in the Arabian Peninsula, the local branch of Bin Laden's network, claimed responsibility for the bomb plot.

CNN also has the story, which is where I snagged the above image.

Now can someone explain why Dubya's popularity goes through the roof when there's a failure to thwart a major terrorist attack on his watch, but when an attack is successfully blocked by Bill (e.g., the Millennium bombing plot) or Barry (this past week's attempt) it warrants nary a blip in the approval ratings?