Over at The Marmot's Hole, where there's a discussion about Ford's opposition to the KORUS FTA, guest blogger Wangkon offered an optimistic scenario involving Detroit's Big Three setting a target of 100,000 units in South Korea that might include sales of the Ford F150 pick-up truck, the kind of thing that does not currently exist in the South Korean market (right?).

Frequent commenter cm is skeptical, saying that SoKo consumers go for the high-end foreign products, like Lexus or BMW, and a Ford just wouldn't cut it, perhaps not even a Ford Mustang muscle car or a Cadillac Escalade pimp mobile. 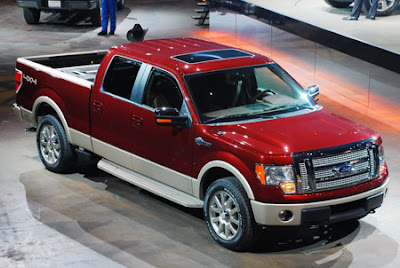 But that begs the question: instead of Ford, GM, and Chrysler following on with their own luxury vehicles, would it not be wiser to squeeze into a niche market and go from there. In short, is there a market for the Ford F150?

I'm not a big fan of these vehicles. I usually encounter them in the city where they are glorified peoplemovers (and often with just one people) that guzzle gas and create a road hazard for other drivers. Indeed, among my ilk we refer to them as Hillbilly Hummers.

I would hate to see them become prevalent on Seoul streets, but is there a market for them out in the countryside, where trudging loads across snowy hills or muddy roads is something people actually need to do from time to time?

Like Wangkon, I'd like to see these things become more fuel-efficient, since other people's gas consumption does affect you, both with pump price and pollution. But if that can be resolved, would these be a good fit anywhere in provincial Korea?