Answer me this of the day

I've decided to launch a new feature where hopefully one of my readers (who, by all accounts, are highly intelligent and quite informed) will be able to answer something I don't know and can't seem to figure out. I have two such questions today:

1. When did the convenience store chain Spar disappear from South Korea?
I remember a few shops here and there in Yongsan-gu, including one not far from Yongsan Ward Office. 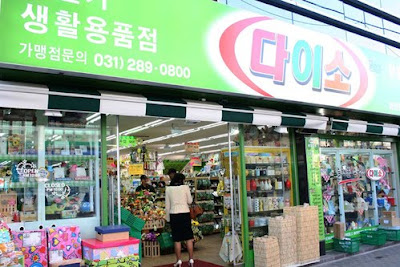 2. Is Daiso (Korea's ubiquitous version of a 99¢ store or 100-yen shop) indigenous to South Korea or did it come from Japan (or somewhere else)?
I always thought it was from South Korea, with its name derived from 다 있어 ("everything's here"), but in Hiroshima this past July, I happened to see one. But just one.
It wouldn't be unheard of for a South Korean chain to end up with a few locations in Japan or elsewhere (Red Mango, anyone?), but it's possible that Daiso is like Family Mart, a Japanese chain so common in South Korea that people assume it's Korean.
on September 28, 2009