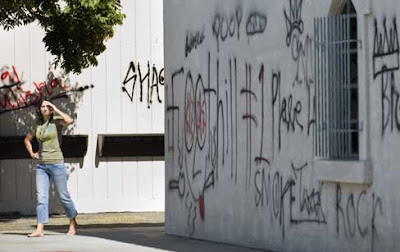 A nineteen-year old man from upscale Rancho Santa Margarita and three teenage minors (aged fifteen, sixteen, and seventeen) from nearby Mission Viejo were arrested for spray-painting hate speech-filled graffiti at an elementary school in Lake Forest, another community in tony south Orange County.

A representative of the Orange County Sheriff's Department said, "they spray-painted swastikas and white power racial slurs on the walls, windows, doors, and grounds of the school. Everything was painted in White supremacy-type statements."
An OCSD spokesman said that hate crimes in southern Orange County are rare. A local resident who recalls an incident in 2005 where a menorah was destroyed says it's especially disturbing that this happened curing the Jewish community's celebration of the High Holy Days.
An odd twist is that the one non-minor who was arrested, Thomson Vo, has what appears to be a Vietnamese surname.
The damage to the school may be as high as $20,000.
on September 27, 2009