Shin Jeong-ah (신정아/; Shin Chŏng•a), the former assistant professor of art at Dongguk University (동국대) who fired in disgrace in 2007 after it was revealed she had faked her credentials, is being sued for 216 million won (about US$200,000) by Sungkok Art Museum, for whom she worked. 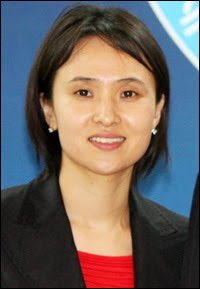 r forged résumé, which included a bachelor's degree she did not earn from the University of Kansas and a PhD she did not finish from Yale University, helped her get work at Sungkok and Dongguk. Dongguk is claiming she embezzled 216 million won from them. She is currently serving an 18-month sentence for fraud, I think.

And I say, more power to them. I want the would-be users of fake credentials to fear the imprisonment, deportation, and/or litigation. Put some teeth into those regulations and the fear of God into the would-be fakers.

I have a master's degree and I'll tell you it took no small amount of time, effort, and money to get it. Not to mention that the degree represents a knowledge base and/or a skill set that current and future employers might want to pay for.

Why should people who have gone through all that trouble to rightfully earn a degree have to compete with those who are faking it? Of course they shouldn't, and it's good that the government is cracking down on this kind of thing. Education is serious business in South Korea, and the public and the authorities can be very unforgiving when it comes to a breach of faith like this.

This goes for foreign teachers as well, whether they be English teachers or lecturers/professors of other subjects. Some people complain about all the hoops of showing one's diploma to secure an E2 or E1 visa*, but there are reasons for that. Back in the 1990s, this wasn't required and they did have problems with people with fake degrees (I personally knew of at least two), but they're taking it seriously now.

* Please note this is not a post bashing E2 native-speaking English teachers. I am not saying all, most, or even many NSETs are in South Korea on fake credentials. In fact, I think the percentage may be significantly smaller now than in the past, owing to the stricter regulations. In fact, I see such harsh guidelines as a way of protecting those who are working legitimately, since it protects them from having to compete with academic fakery. Of course, I think an argument could be made that one shouldn't have to show original documents every time they get a new work visa somewhere, and perhaps a service could be arranged for the Korean authorities to verify degrees independently, putting the burden of proof on the ROK government.