This is one reason I don't care much for the new generation of roller coasters.


The other reason is that my stomach seems to be less and less tolerant to high speed shaking and wobbling and sharp turns as I get older. It's like I'm turning back into my eight-year-old self.

Anyway, a cable snapped on the Xcelerator, one of those oh-my-effin-Lord rides at Knott's Berry Farm, Orange County's other amusement park (which is also billed as the world's oldest amusement park). (Story also here.)

The debris you see is apparently small bits flying at the boy and the man when the cable snapped, which cut the kid's leg. The cut and smoke coming from below may be responsible for the boy's panicked look. As you can see from the video, the cars roll back from that high loop. A Knott's Berry Farm spokeswoman described it ever so tranquil terms:


Blazey said the ride’s cars had just left the boarding station when the cable broke free. The train rolled backward toward the station.


A 34-second video posted on the Web site amusementsafety.org shows the train leaving the station. A few seconds later, some particles go flying up into the faces of some bewildered riders. The train stops, before rolling backward. Once the train stops, the riders signal for help while trying frantically to get out of the lock lap rests as smoke rises from beneath the train. The video has since been removed from its original site on YouTube.

Ah, corporate American taking a page from the Chi Coms: Make sure to eradicate all embarrassing video. 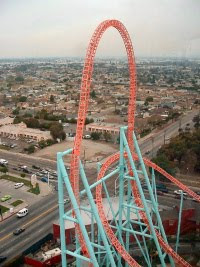 Anyway, at left is a view of the top loop of Xcelerator, some 205 feet above the ground. This puppy is visible for miles around. Somewhere along this ride, maybe on the way down from the loop, the trains get up to speeds of 82 mph (132 kph).

It's not a ride I will ever go on, unless offered a substantial amount of money. I went on Silver Bullet and Ghost Rider, the former making me extremely motion sick, lasting for about two hours. The latter would have been a tolerable ride for me at any other time, but mostly it served as a mocking reminder that I shouldn't have gotten back on a roller coaster again that day.

Though it was January, we ended the day with Bigfoot Rapids (we were the only ones on it), and dried off in Mrs Knott's Chicken Dinner Restaurant.

UPDATE:
A note on censorship. I started to write this "update" as a comment at KoreaBeat in response to Barbara. Barbara wrote:


First…oddly I tried to click on that video and I’m getting a “National Police” screen. I can’t read it, but I get the sense that it’s a WARNING: We won’t let you watch the video.

I’m American so I guess I’m spoiled when it comes to censorship.

I wouldn't be so smug. In America, corporate censorship, backed by threats of litigation, helps to close that gap caused by the (relative) lack of government censorship.

This post itself provides a timely example. Take a look at the bottom of the OCR article:


Screen grab of a video posted on YouTube of the Knott’s Xcelerator ride, shows debris pelting two riders. Two people were injured. The video has since been removed from the site.


Editor’s note: The owner of the YouTube video showing the Xcelerator accident has removed it from the site for unknown reasons.

Though the original video was wisely copied by others who held on to it and later kept it up in other sites, it's telling that Knott's worked to get it removed. My check into other reported accidents, like Windjammer, Perilous Plunge, and others, indicates that news links to prior accidents have mysteriously disappeared from reputable news sites' databases such as the OCR and LAT.

I'm addressing, of course, the smug self-satisfaction of someone with their "this doesn't happen back in America" attitude, but I'll still point out that the same type of corporate censorship also goes on in Korea. How many people are aware of, say, the deaths that occurred during the construction of LotteWorld? Corporate Korea goes to great lengths to scrub the Intertubes of embarrassing incidents, and the mind boggles at what safety issues we're kept in the dark about.

UPDATE 2:
The Orange County Register says that, as of yesterday, the ride is still not being operated, pending some checks. See here for a detailed story.