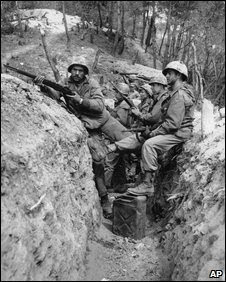 The South Korean military is going to try to earn some cash by selling some vintage weaponry it was given decades ago by the United States (further details here).
According to the BBC, the ROK military has "a vast stockpile of old Korean-war rifles" that it plans to offer to collectors in the US:

The guns were originally sent to Korea as military aid, and some were also used during the war in Vietnam.
For more than five decades, they have been kept mothballed in warehouses.
Most of those on offer are M1 rifles - a weapon once described by US General George S Patton as "the greatest battle-implement ever devised".

The BBC also notes that these weapons are occasionally used in training exercises for reserve forces, which is what most men remain in after their primary military service is over, but generally they've been gathering dust.
A total of 86,000 M1 rifles and 22,000 carbines will be sold. The carbines were considered less reliable, frequently jamming in the extreme cold and sometimes "failing to stop heavily clothed North Korean or Chinese soldiers at short range."
That could explain a lot.
Anyway, if this works out for the ROK military, I might start slapping "vintage" labels on some of the half dozen or so old Macs from the 1990s I have piled up in storage back in Seoul.