This is South Korea, right? The free one?

The Korea Times is reporting that a lot of foreign nationals are upset about new Immigration crackdowns whereby officials may randomly go up to your foreign-looking face and demand to see your documentation:

The Korea Immigration Service's crackdown on illegal immigrants this year has been met with controversy due to allegations its officers are making random checks on those who look like foreign workers.

Members of the legally residing foreign community are also upset at the failure to stick to a legal set of procedures.

"Immigration officials make raids on the street," said a foreign scholar in Seoul who spoke on condition of anonymity.

She said three Nepalese foreigners were grabbed on their way to get a haircut recently, while a pregnant woman was taken outside of the city last week. Others are caught during routine shopping errands, she said.

Foreign nationals in South Korea are legally required to carry their ARC (alien registration card, 외국인등록증) or passport, I think, but the government has generally been quite lax about this. Nevertheless, crack down or no, it's always a good idea to know where these things are and have them with you.

But having them so you won't be inconvenienced by a KIS official (as the Immigration spokeswoman suggests) is not a proper answer to concerns that such on-the-spot checks based on appearance (Can you say, "racial profiling"?) are a potential violation of human rights (and ROK law). 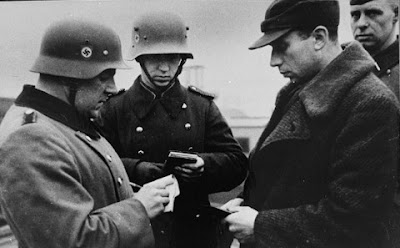 [above: "Sŏryu, please!" KIS enforcers agents model the Immigration Service's new uniforms while determining whether an unidentified non-Korean man is clear to enter the local Lotteria.]