President Roh Moohyun was a disaster when it came to Korea-Japan relations. He and his counterpart across the pond, Prime Minister Junichiro Koizumi were too preoccupied with pandering to the nationalistic elements of their respective political bases to foster what both countries need in the future: a strong Japanese-Korean relationship. Roh, for his part, magnified and exacerbated the Tokto/Takeshima territorial dispute, declaring "diplomatic war," when he should have taken the high road.

My hope with the administration of Lee Myungbak, who was not only born a Japanese national (like all his predecessors except Roh Moohyun), but was actually born in Japan (Osaka, to be precise, less than two weeks after the bombing of Pearl Harbor), was that Lee simply wouldn't let the rantings of nationalists on the 'net and in the press derail Seoul-Tokyo relations.

So it's something of a bonus that 2MB is inviting Emperor Akihito to visit Seoul next year. What's particularly poignant (if not surprising) about it is that he's doing so on the occasion of the centennial of Japan's annexation of the Taehan Empire, which is what Chosŏn (Korea) was officially known as at the time.

This, according to the Korea Times, is an attempt to move Korea-Japan relations forward, an effort tried by predecessors Kim Daejung and Keizo Obuchi but abandoned by Roh and Koizumi:


"Korea and Japan have difficulty in improving relations due to the past," Lee said in a joint interview with Korea's Yonhap News and Japan's Kyodo News at Cheong Wa Dae.

"Akihito's visit to Seoul will have a significant meaning in that the countries can leave the past behind and foster a future-oriented relationship.

"The Emperor has traveled all around the world, but couldn't visit Korea. I'm confident that Korea-Japan relations will improve rapidly if he visits Korea," Lee added.

Korea as a country needs to "move on," as it were, and many South Koreans — perhaps even a majority — know that. The problem, as with so many other things in the South Korean public sphere, is that the "vocal fringe" dominates narrative about so many things related to Japan, such that historical quibbles dominate modern developments.

Those who might disagree are often afraid to raise their voices, for fear of speaking out in favor of what might be a minority opinion on Japan, and in some cases for fear for their livelihood.

With many issues, it is the chinboistas who rile up and orchestrate the vocal fringe, but Imperial Japan is one topic where lingering resentment toward this past aggressor and occupier festers due to unresolved issues (which has sometimes been the fault of Seoul as much as Tokyo).

Many of those who still hold the Japanese government or its leadership in contempt (less so the Japanese people themselves) have nothing to do with the chinboistas. But that's not to say the chinboistas don't join the fray; they're always looking for that magic combination.

President Lee also said he expects an improvement in ties with the inauguration of Yukio Hatoyama, a prime minister not part of Japan's long-ruling LDP machine who is thus less likely to be beholden to Japan's nationalistic right on issues like Yasukuni Shrine, historical whitewashing of textbooks, etc.

Instead, perhaps they can see opportunities for the two countries to work in conjunction, such as a unified stance on North Korea, working together to assist their mutual ally and defender the US in places like pirate-infested waters, working out a free-trade agreement, etc., etc.

A good development. Just be ready, Mr Lee, to not back down when faced with opposition from the nattering nabobs of the netizenry. 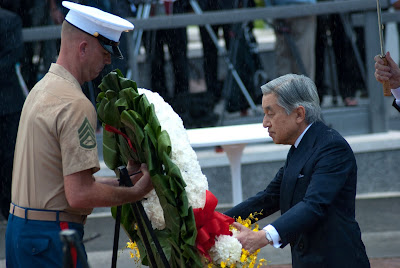 [above: Emperor Akihito lays a wreath at the National Memorial Cemetery of the Pacific (Punchbowl) during his and Empress Michiko's visit to Hawaii in July 2009, which I believe was the first imperial visit in fifty years to the island viciously attacked by Imperial Japan in December 1941, ushering the US into World War II and eventually leading to Imperial Japan's humiliating defeat. Even during the 1990s, some American visitors to the USS Arizona Memorial in Pearl Harbor would complain in the visitor logs about Japanese being allowed to visit the site.]