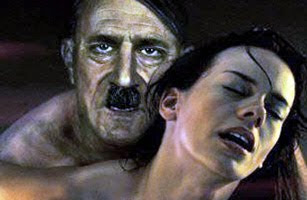 If the above picture evokes a sense of disgust in you, well, that was intentional. Hitler doing the nasty doggie style is at the center of a German anti-AIDS campaign:

Germany's latest AIDS-awareness commercial evokes some strong emotions: shock, disgust, nausea. And that's exactly the point. The controversial ad, which was released online on Sept. 3 and starts running on German TV on Wednesday, Sept. 9, shows a couple having steamy sex in a dimly lit room with menacing music playing in the background. The viewer sees only the back of the man's head until the very end, when the camera pans to his face — to reveal that he's Adolf Hitler. Then the slogan flashes across the screen: "AIDS is a mass murderer."

It's a strong message, but HIV/AIDS organizations in Germany are arguing over whether it's the right one. Rainbow, the AIDS-awareness group spearheading the campaign — which also includes newspaper ads and posters featuring the images of other dictators, like Stalin and Saddam Hussein — says it deliberately wants to provoke people, especially young Germans, into using condoms to help prevent the spread of HIV. "We want to give this terrible virus a face," Jan Schwertner, spokesman for Rainbow, tells TIME. "AIDS is a forgotten issue in Germany. It's been swept under the carpet. This shock campaign is necessary to get people thinking again."

And of course, as the article notes, that has the potential for getting current HIV sufferers thrown in with the likes of one of the most evil men in human history.

Well, maybe not. As carriers of the virus, they are victims, not perpetrators.

Anyway, you can't beat controversy for creating buzz, and this is the kind of campaign that will stick in people's minds for quite some time. Disturbing. But it sure beats the "we are one kochu" slogan you used to see in men's rooms in South Korea.

UPDATE:
Oh, my effin' Lord, on second read that is the crassest title I've ever come up with. But it's too late to change it in the blogspot URL, so I'll leave it as is. My sincerest apologies to anyone who might be offended.