Because the Segway was just too easy

Jealous that Segway and Toyota were cornering the market on devices that would allow humans to move at the speed of walking but without all that pesky calorie loss, Honda yesterday unveiled a futuristic unicycle that allows users to move through the sidewalks while looking like someone is probing their ass. 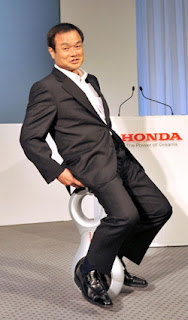 The U3-X (the "3" stands for "three times the number of wheels this thing has) is the latest entry in compact self-balancing vehicles designed to deplete the wallets of people with more money than they would ever possibly need.

Unlike its two-wheeled rivals, this is the first entry with only one wheel. Reducing the number of wheels by half was a cost-cutting measure intended as a nod to the difficult times faced by even the filthy rich in the global recession.

The U3-X has a seat on the top and a tiny footrest on each side of the wheel. Riders steer by shifting their weight, while balance-control technology developed from research for the Asimo, Honda's bipedal humanoid robot, automatically keeps it upright.

In his spare time, Asimo is also working on other new robot technologies, and by 2013 is expected to have an army of 1.3 million minions, just under government estimates for the number required to overtake the Self-Defense Forces, if needed.

Honda warned that would-be riders above the upper weight limit of ninety kilograms will topple the device, Honda says, because even the most advanced technology is no match for the deadly combination of American obesity and Krispy Kreme.

With a handy-dandy handle, the device is easy to carry, weighing just 10 kilograms (160 donuts).

Honda officials said they think the electric unicycle will mostly be used indoors, mostly because of embarrassment.

So in conclusion, I would be remiss if I did not ask, when will Korea's Samsung, LG, Hyundai, Kia, or Lespo Bicycle Company get into the fray? Are we going to just lay back and let Japan win the race for the silliest looking transportation vehicle?