Take me out to the ball game...

In late July I went to a baseball game at the Olympic Stadium complex (종합운동장) in Chamshil (Jamsil) with four friends that included three French people who were curious about America's (and lately East Asia's) pastime. While I explained all the plays and odd rules, we watched Samsung whoop LG's ass. 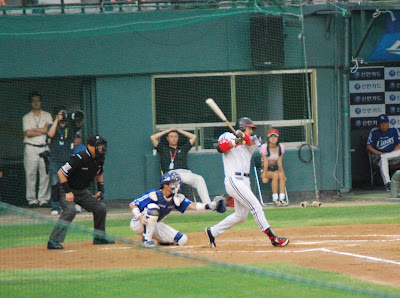 North American baseball fandom is centered around a geographic following, whereas Korean baseball (following its Japanese counterpart) is a mixture of corporate and regional affiliation. For example, the Minnesota Twins are the Minnesota team, cheered on by people all across Minnesota (and perhaps the nearby Dakotas, Iowa, and Manitoba), whereas the LG Twins are, well, more associated with LG than their Seoul location. For teams from the provinces, as I understand it, the regional association can be a bit stronger.

So for me, cheering on the Angels is a no-brainer, since I'm from Los Angeles of Anaheim Orange County, but with LG-versus-Samsung, I could go either way. Every single cell phone I've ever owned in South Korea (plus my pre-iPhone cell phone in Hawaii) has been an LG. My service provider is LG, too. So's my refrigerator. But I own a lot of Samsung products, too, including an air conditioner and a couple televisions. I once drove a Samsung rental car.

So my loyalties lay instead with whomever is going to put on a better show. Samsung played quite well, and I couldn't help but cheer their expert plays, but the problem was we were sitting in the LG section, and LG sucked that night. Not the best situation, and "B" kept hitting me in the shoulder, her way of reminding me that there were drunk LG fans all around us. 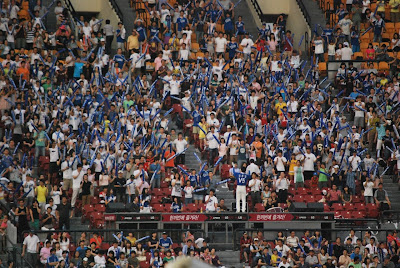 [above: fans in the Samsung section.]
So this (above) is where we should have been sitting, with the well-behaved fans of Samsung and their blue thundersticks, on the other side of the stadium. Instead we were amongst a bunch of red thundersticks, which were occasionally orchestrated by these lovely cheerleaders. Yes, for those of you who have never been to a Korean baseball game, there are cheerleaders, and they do try to get the crowd going. "B" kept asking me to get pictures of these cheerleaders (I still haven't figured out exactly why), so the three dozen or so I took isn't me being a lech. 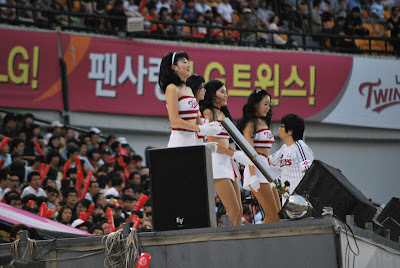 [above: I do wish I'd been at the proper angle to get a clear picture of any one of these girls' chest with "Twins" written across it. Because that, in my childishly salacious mind, would be funny.]

Indeed, objectification of women is no small part of Korean baseball. You may have noticed in the uppermost picture that Samsung has a bat girl. I always thought this role was filled by a young boy who aspired someday to be in the big leagues, but I'm not really sure since in California all I can afford are the nosebleed seats, too far for even my telephoto lens to verify who is picking up the bat. 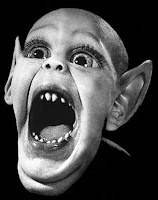 I guess there's nothing wrong with a bat boy being a young woman, though I fail to see the function of her showing off her midriff. And truth be told, I think I'd prefer a bat girl over a bat boy. 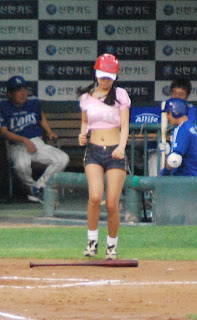 Besides the enthusiasm, the cheerleaders, and the exposed tummies, another thing that I love about Korean ball games (and Korean movie theaters, for that matter) is that they haven't yet adopted the American practice of price-gouging spectators (or moviegoers). Food and drink (including beer) can be found at down-to-earth prices, although the fast-food joints ran out of their combo specials pretty quick (yes, this bewildering KFC with the Korean food items on display really did have a full KFC menu).

We all had chicken sandwiches, snack cookies from the convenience store next door, and later a beer. 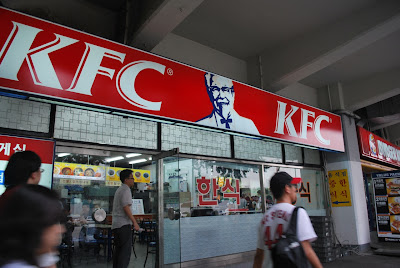 [above: 한식? Apparently "KFC" stands for "Korean Food! Come in!"]

The French and "B" all found the game quite interesting, even if "our team" lost. I was quick to point out the shared similarities between Korean ball games and American ball games, such as "the wave" and, lately, the kiss cam. 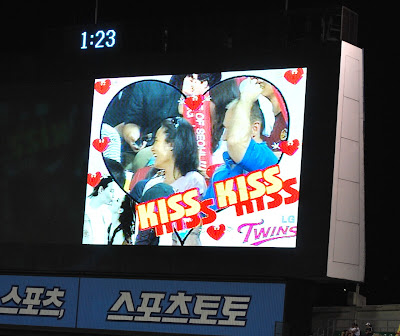 I was just about to put my camera away when the kiss cam popped up. The camera crew, via the giant TV screen, highlighted about four couples who were, under pressure from the crowd, expected to kiss. Hopefully they were people who were actual boyfriend-girlfriend or spouses (of each other), and not random strangers sitting next to each other.

The fourth couple was the mixed-race couple shown above and below, which is why I took the pictures. Now, the meme among many foreign residents, especially in the K-blogs, is that the male-dominated Korean social structure supposedly loathes such pairings. If this is true, the only explanation for the stadium cameramen focusing on such a couple would not be to get them to smooch, but to provide easy identification so that drunken spectators could hunt them down on the subway after the game. Right? 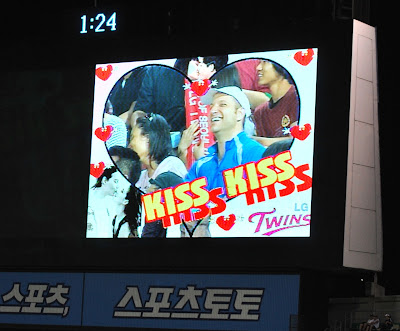 As it turns out, the girl was quite embarrassed to be kissing this guy in front of all those people (a typical reaction, by the way, even among those not engaging in forbidden love), and you can see that she moved away from him in such a way that it would be harder for him to fulfill his duties.

All in all, it was a fun evening. No post-game violence (though "B" says sometimes rival fans who have had too much to drink occasionally go at each other on the train ride home), parking cost only 3000 won (it's $15 or $20 at Dodger Stadium and $10 at Angel Stadium), and the French went away feeling that baseball is indeed a fun game to watch, but le football remains superior.