On the day before Citizenship Day (a non-Federal holiday traditionally celebrated by going to work and then coming home to watch whatever's on the telly that night), the Orange County Register asks, "Should United States citizenship be automatic for anyone born in the US?"

The answer is clearly "no" for no small number of OCers:

On the eve of Citizenship Day, immigration advocates reacted to anti-illegal immigration groups who are attempting to cut off automatic citizenship for children who were born on United States soil.

One such California initiative – created by San Diego resident Ted Hilton – hopes to impose new rules for birth certificates, essentially calling for the state to issue one type of birth certificate to children of U.S. citizens and green card holders and another to children of temporary residents and of those who are here illegally.

"I think the automatic citizenship policy is bankrupting California, and we have to terminate that," Hilton said.

He said he is hoping for the California Taxpayer Protection initiative to make its way onto the ballot in June.

Evelyn Miller, whose Irvine home serves as something of a clearinghouse for incoming petitions from surrounding counties, said she's doing it to stop the "invasion" of people coming to the country illegally. Miller is a member of anti-illegal immigration group California Coalition for Immigration Reform, based in Huntington Beach.

The OCR story even has a neat little poll with a very loaded set of answer choices, though I'll show you the results before you have a chance yourself to participate: 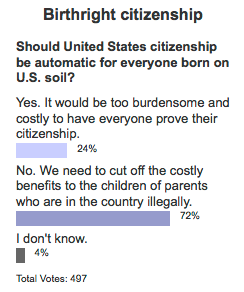 Frankly, I don't think anyone should have full citizenship unless they can pass a test. If you can't tell me something basic like how many Senators, House Representatives, or Supreme Court Justices there are, and how long they serve, then you shouldn't be deciding who does the deciding.

At any rate, I don't like the idea of tinkering with this long-practiced notion of citizenship-for-all-comers. But I suppose if there had to be a change, I could accept one where citizenship were automatically granted only to those whose parents were in the United States legally, but that would have to include those on student visas, unexpired tourist visas, temporary work visas, etc.