I took this in August near Kwanghwamun Station (광화문역, aka Gwanghwamun) toward the end of my working vacation in Seoul, when I visited the new Kwanghwamun Plaza with a friend. If I remember correctly, it's an advert for a wax museum. 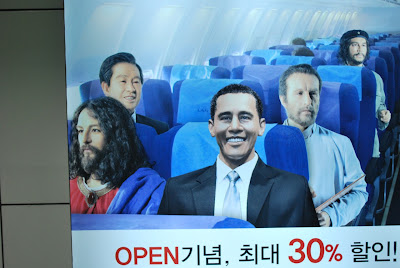 I guess the president and his cross-eyed friend are sitting in the Messiah Section. Frankly, I'm not sure why they chose an airplane as a venue to show off some of the featured celebrities. Let's just call it Air Force "The One."

And who's the guy behind Obama supposed to be? It's either Richard Dreyfus or the love child of Saddam Hussein and Mahmoud Ahmadinejad. You'd think either of them would be on a no-fly list, am I right?
on September 16, 2009