Faces of the Day 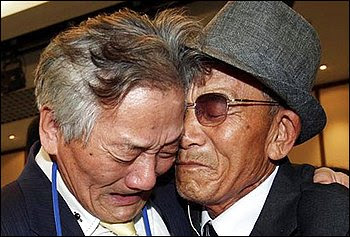 The family reunions, now routinely held firmly on North Korean soil at Kŭmgangsan National Park at the Hyundai-built resort, is a font of "faces of the day." Above are South Korean Lee Jungho (이정호) and his older brother Lee Kwaesŏk (이괘석), who lives in North Korea. The AP story (via the Washington Post) from which this photo comes does not give any details of how they became separated, but their faces say it all.
More than half a century of separation and uncertainty, ephemerally interrupted for a weekend. I can't even begin to imagine the torrent of emotions these poor old men must feel.
There are some 200 participants with 200 stories that are unique but all too familiar. There is Lee Dong-un, an 84-year-old South Korean man hearing from his 60-year-old North Korean daughter about how his wife was killed when a bomb fell on her town.
There is Chung Wanshik, now 68, tearfully asking his 95-year-old father Chung Daechun, who was on business in South Korea when the war began, why he failed to soon come back from Seoul as he'd promised.
Two of the reunion participants are South Korean fishermen who were abducted by the North Koreans twenty-two years ago, echoes of Kim Young-nam, the high schooler who was kidnapped to the north and eventually married Japanese abductee and cause célèbre Megumi Yokota. The North Koreans allowed him, too, to meet his elderly mother before forcing him to return to his geopolitical imprisonment. One of the South Korean fishermen, Roh Songho, brought his North Korean wife and daughter to the reunion.
Such cases highlight the 560 soldiers not returned since the end of the Korean War and the 504 civilians, mostly fishermen, whose boats were seized since then.
The South Korean Red Cross says that of the 127,400 South Koreans who have applied to be part of the reunions since 1988, forty thousand have already died.
Watching these reunions play out, I always get this sinking feeling of despair for these families. They are given the ultimate Hobson's Choice: see your long-lost relatives for an emotional but fleeting moment after which you will probably have no communication with them whatsoever, or never see them at all. The latter has the advantage of not ripping open old wounds, but it runs against the grain of the social forces that drive us — pull us — toward family.
Maybe 먼할머니 was lucky, in some way, in that her choice was made for her. I don't know how I would have consoled her had she gone through such a meeting.
But I know that tens of thousands of South (and North) Koreans would choose to see the weather-beaten faces of their loved ones and hold their hands one more time.
It's cruelty layered upon cruelty, but what else is there for them?
on September 27, 2009