From Korean-language news (HT to Korea Beat), we learn that the "pro-unification" forces are again trying to use the MacArthur statue in Inchon's (인천/仁川; in•ch'ŏn, aka Inchon) Freedom Park (자유공원; cha•yu kong•wŏn) as a focal point in their efforts to push anti-American sentiment. 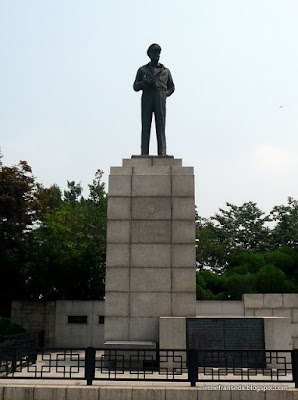 [above: The MacArthur Statue at Chayu Freedom Park. (Photo snagged from here.)]
As usual, the chinboistas are trying to find that one issue or combination of issues that will provide the resonance they need to whip up public sentiment among the hoi polloi. MacArthur is a favorite subject because he is controversial and because his statue's sitting right there.
But if they ever succeeded (and it's not likely, considering even Roh Moohyun wasn't going to move it), what ever would they rally around? It's not like they've got statues of mad cows lying around. 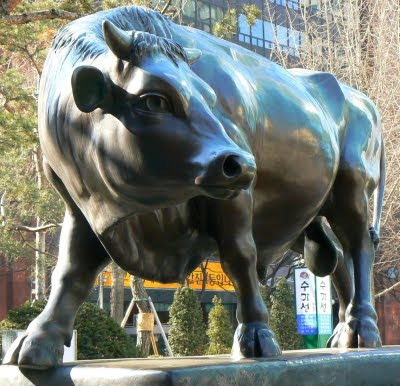 [above: Well, not many. (Photo snagged from here.)]
Of course, all this gives me the perfect excuse to link back to this oldie but goodie from 2005 about MacArthur, which was my main point in writing this new post. Even right-wing curmudgeon Sperwer called the 2005 piece a "nice post!" and he usually hates what I write.
on September 14, 2009