Face of the Day

Inspired by this regular feature at Korea Beat, here is my "Face of the Day": 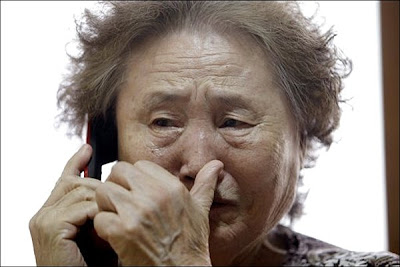 Lee Sunok, who has been chosen to be one of ninety-eight elderly South Koreans who will participate in upcoming "family reunions" with their relatives in North Korea, weeps during a phone interview about her upcoming meeting with relatives she has not seen since the Korean War half a century ago. According to the Associated Press (via WaPo), Lee Sun-ok fled from North Korea to the South to escape chaotic fighting as UN forces were forced to retreat, boarding a ship along with thousands of other people in December 1950.
An updated story is found here.
Face-of-the-day runner-up: 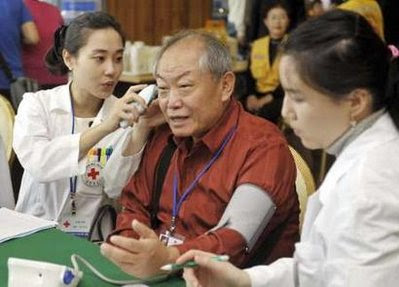 A South Korean man who will also participate in the family reunions gets a check-up in Sokcho. The last thing we want is to spread H1N1 "swine flu" to the North Koreans.
on September 26, 2009