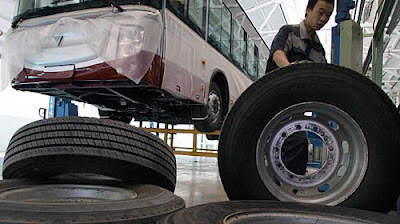 In a decision that could roil trade tensions with Beijing, President Obama agreed Friday to impose hefty tariffs on tires imported from China.

The decision came after the U.S. International Trade Commission, a federal agency, determined that a surge of Chinese-made tires had disrupted the domestic market and cost thousands of jobs in the U.S.

Within 15 days, the U.S. would add a duty of 35% in the first year, 30% in the second and 25% in the third on passenger vehicle and light-truck tires from China. That is less than the 55% tariff recommended by the trade panel, but analysts said it would still be large enough to keep most Chinese tires out of the competitive U.S. market.

"The president decided to remedy the clear disruption to the U.S. tire industry based on the facts and the law in this case," White House Press Secretary Robert Gibbs said in a statement.

Despite this move, the White House is saying it is committed to free trade. Yeah, we supporters of the KORUS FTA know all about that.
China has since retaliated with tariffs of their own:

China fired back against proposed tariffs on Chinese tires imported to the United States by announcing today that an anti-dumping and anti-subsidies investigation would be launched on American auto parts and chicken products, state media reported.

The move could signal the start of more trade tensions between the massive trade partners at a time when the two economic powers were expected to lead the globe out of the financial crisis.

"This case is perceived as a turning point in U.S.-China relations and likely to represent a trend toward subtle, if not overt, forms of protectionism from both sides," said James Zimmerman, a partner in the law firm of Squire Sanders & Dempsey in Beijing. "American business in China should be prepared for what might be a zealous retaliatory response from China which might impact a broad range of U.S. commercial interests."

This could all get quite ugly. Don't expect Beijing to vote in favor of Chicago for hosting the 2016 Summer Olympics at the IOC Congress in Copenhagen in October.
One wonders what this means for South Korea (and Japan). Is Obama going to focus on China's apparent transgressions instead of South Korea's "unfair" selling of more cars to the US's giant market than the US does to South Korea's much smaller market? Has he found a new bogeyman on the trade issue so that the Korea-US free-trade agreement can eventually get ratified by Congress?
Is Obama using the threat trade barriers as leverage to get Beijing to finally come around to dealing harshly with North Korea? That's a prospect that would make Joshua at One Free Korea happy (me, too).
on September 14, 2009