In a recent post about whether it's appropriate or not for groups of North American spectators to strip off their shirts and spell out words with the letters painted on their bodies, commenter "1994" wonders how Americans would react, say, if Koreans started acting obnoxious at American Major League Baseball games:

Called ThunderStix and CheerStix, they have been playing their clattering concertos at sports events since the late 1990's. (They also made an appearance at the 2000 Republican National Convention.) But ThunderStix appear to have exploded into the American consciousness (and eardrums) during the Anaheim Angels' playoff games at Edison Field.

Armed with their red, nonelastic polyethylene noisemakers (all freebies), Angels fans created a resonant din that was noticeably louder than the noise fashioned at the Metrodome by Minnesota Twins fans waving their Homer Hankies (cost: $1) during the American League Championship Series.

''I've never heard anything this noisy,'' said Kevin Uhlich, the Angels' senior vice president of operations, sales and marketing. ''I've seen things with great visuals. We did an umbrella giveaway where everybody spun them around. But with this, we get the visuals and noise in one.'' 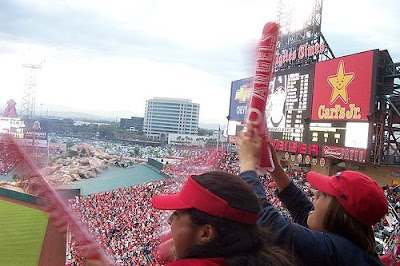 Okay, but what's the Korea connection? It turns out that the Thundersticks in use in South Korea since the early 1990s were noticed by Americans who then turned around and, ahem, reverse engineered the idea:

The history of the noisy sticks can be traced to Korean baseball games in the early 1990's, according to Lundberg and Les Laskey, the vice president of sales for Vonco, which makes ThunderStix. Lundberg worked for the Korean company that made them, then started his own company to sell his version.

''Then we broke open the U.S. market on Sept. 7, 1997, a United States men's national team soccer game in Portland, Ore., against Costa Rica,'' Lundberg said, recalling the event as if it were the day he discovered electricity. ''There were 30,000 CheerStix and the atmosphere was phenomenal. People said it was the greatest crowd ever.''

Laskey said that Vonco's entry into the market began with its noticing the noisemakers' popularity in Korea, and the company used its expertise in the manufacturing of plastic packaging and inflatable novelties in Lake Villa, Ill.

But to answer 1994's question, there are actually a lot of people who don't care for stands full of noisemakers, feeling it's a distraction for both players and spectators, but they associate it with Americans, not Koreans. If anything is associated with Korean fans, it's the drums and the chants, and possibly picking up litter when the game is over.
on September 24, 2009