This post over at Korea Beat focusing on the apple harvest in North Kyŏngsang Province (Taegu is affectionately called "the apple capital") has made me a little homesick for Korea as fall approaches.

One thing I always hated about living in Seoul was that certain types of fresh produce were generally quite expensive. Traditional Korean staples are relatively cheap (with rice being a glaring exception), but if I wanted blueberries, raspberries, asparagus, or some such, it was always at a premium. Even bananas are kind of expensive (though less so now). Part of it is because of lingering protectionism and that may erode as South Korea gets into more FTAs, like the one with Chile.

Unfortunately, Hawaii is just as bad, since almost everything has to be shipped here from the Mainland or some other country. (Even locally grown stuff, like bananas, macadamia nuts, and pineapple, ain't so cheap.)

But at least in Korea, once a year, you could head down to Taegu and buy a giant box of great-tasting apples for about 10,000 won, something to eat up and share with friends or family. Can’t do that in Hawaii. 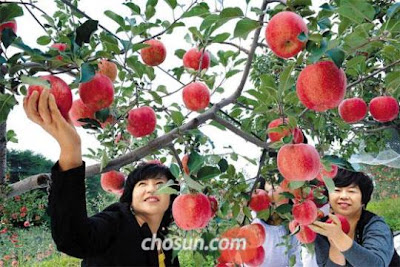 [photo: Just look at the way the woman on the left gently cups the fruit dangling from the branch. Gives me a warm feeling all over just thinking about it.]