Courtesy of Foreign Policy. Sure, Joe Wilson yelling "You lie!" during a speech by the President, an invited guest of the Congress, was uncivil. Maybe even a symptom of the derisively dichotomized discourse that is dangerously and detrimentally dividing the country.

But rather than get into our problems and how we can solve them, Foreign Policy lets us know that, "Hey, it's not as bad as other places," and thus we don't need to deal with it, I guess:

The U.S. House of Representatives voted on Tuesday to admonish Rep. Joe Wilson for yelling "You lie!" during President Obama's recent address to Congress. But in some parts of the world, outbursts like Wilson's would barely raise an eyebrow. 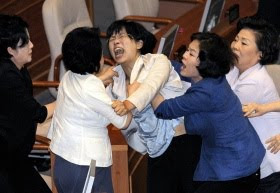 Anyway, here's page one of their tu quoque presentation, dealing with South Korea:

Source of tension: Korean democracy is a full-contact sport in which debates between the dominant Grand National Party (GNP) and its opponents over foreign policy and media freedom are frequently resolved with fists … or whatever heavy object is in the room.

Low points: South Korea’s first internationally noticed punch-up occurred in 2004 over the impeachment of then President Roh Moo-hyun. MPs loyal to Roh attempted to block what they saw as a coup by refusing to leave the assembly’s podium. Scuffles broke out as security tried to remove the unruly delegates, who began throwing punches and tossing furniture. (Meanwhile, an unidentified man crashed a car into the outside of the building.) The offending MPs later got down on their knees to apologize to the nation.

But the Roh impeachment battle was just a prelude to the December 2008 war over a controversial free trade agreement with the United States. After the GNP submitted the bill to a parliamentary committee on trade, attempting to rush it through before Barack Obama took office, opposition MPs attempted to break into the locked committee room with sledgehammers and an electric saw. The terrified lawmakers inside the room barricaded the door with furniture and fought the intruders with fire extinguishers. TV cameras broadcast the images, including one of a MP bleeding profusely from the face, to viewers around the world. A compromise was reached, but only after the opposition occupied the assembly building for 12 days.

The incident apparently didn’t satisfy the blood lust of Korean lawmakers, though. A debate over media privatization in July devolved into an all-out fistfight.

Ask yourself, FP, what is the point of comparing the US Congress to the ROK Assembly (or Taiwan's, or Ukraine's)? Maybe the case with Britain or Australia is a bit more apt, but should the US aspire to be like the other three?

They're worst case situations involving recent democracies where accommodation and cooperation between opposite parties has not set in due to life-and-death power struggles that predate voting rights, which came not all that long ago. Really, these are places where they truly need to clean up their act, providing Joe Wilsons of America with no cover whatsoever.