Korea Telecom has announced their pricing plans for the "new" iPhone and other smart phones, though they haven't yet worked out the subsidies with Apple, so they don't know how much the iPhone will cost the consumer to take it home. 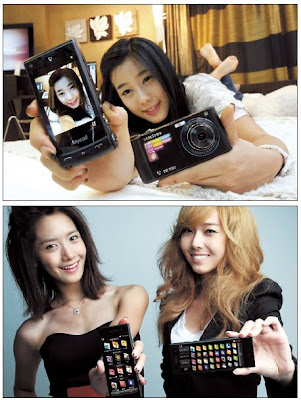 Korean companies are coming out with competing "smart phones," including the one held up by the girl on top, and the two held up by the other girls on the bottom. They do some neat things, I'm pretty sure.
But I'm here to tell you, don't buy an iPhone. Probably. I'll tell you why in detail later (and it has nothing to do with promoting Korean products or falling for the three women in the above photos). It involves figuring out whether the things that make it so neato if you have one here in the States will be available if you're in South Korea. Like finding the closest Starbucks through Google Maps, or using the AroundMe application to find the closest bank, or being able to use the thing as an impromptu GPS device.
You're a fool if you pre-order. Go to the Apple Store in the COEX mall and play with the danged thing and see if it has what you want it to. I'll try to explain in the next few days when I do a rundown of the different features, to give you a chance to check if those things are available in Korea and in a language you feel comfortable with.
I love my Mac and I love my iPhone, but it's not for snobbish reason. I love my Mac not because it makes me looks smart, but because it allows me to compensate for my deficiencies, like not having the patience to wade through arcane computer set-ups. I love my iPhone not because it makes me look cool (I'm either so cool I don't need that an iPhone would be redundant, or I'm so hopelessly uncool an iPhone would make no difference), but because it does funky little things I enjoy and it allows me to check my email and look things up on the Interweb whenever I feel like it. It makes arguing stuff so much more efficient when you can, in real time, go to Wikipedia and see who really is right about whether Nixon's dad grew citrons or lemons up there in Yorba Linda.
At the same time I love the things that Steve Jobs throws our way, I am no proselytizer for all things Apple. I will dispassionately tell people who eye my MacBook Pro that, no, they should buy a PC instead. Especially when they know nobody personally who can walk them through the switchover process. I'll tell people the same about the iPhone, especially if they are the type who really won't likely take advantage of all the neat things you can do with your unlimited data plan. Just 'cuz it works for me, doesn't mean it works for you.
Caveat emPhone.