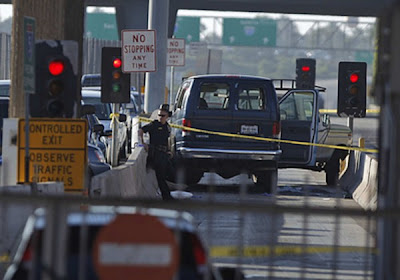 The San Ysidro Port of Entry, the border crossing which allows people from San Diego to cross into Tijuana and vice-versa, was closed for the first time since the assassination of JFK in 1963. This was due to a shooting incident that occurred when US border agents tried to stop suspected smugglers from speeding through the crossing by firing at three vans thought to be full of illegal immigrants:

Three people in the vans suffered injuries and a person in a nearby car also was wounded in the unusually brazen smuggling attempt, U.S. authorities said. More than 70 people inside the vans were arrested.
Northbound traffic at the checkpoint, where about 40,000 cars cross daily from Mexico, was backed up into Tijuana for miles as San Diego police investigated. The secondary inspection area filled with potential witnesses from cars in the lanes near the shooting. By evening, the lanes approaching the crossing had been mostly cleared of traffic.

The Los Angeles Times article says that smugglers occasionally try to run the border crossing, but I question the wisdom of that since there aren't a lot of avenues for escape and such vehicles would be easy to track and apprehend.
What concerns me about this is that it is yet another sign of the lawlessness in Mexico — fueled by America's insatiable appetite for drugs — is creeping into American territory.