ROK Drop on prostitution "in the ville" 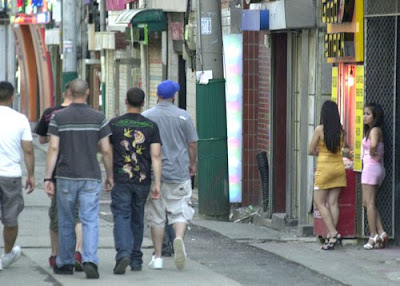 GI Korea at ROK Drop provides great analysis of a Stars & Stripes article exposing the obvious: prostitution in the "juicy bars." GI Korea in general provides very well balanced and well informed views on issues related to USFK (US Forces Korea) and Korea in general, and this is no exception.
Rather than just talk about this ongoing problem, which he says has gone down in recent years as the clean-up on aisle 2 continues, he offers a viable solution to the nasty issue of human trafficking that feeds the sex industry in Korea nowadays: Put off-limits any bar that employes third-party nationals.
He adds:

However, I don’t see this happening because of the politics involved around the camps with the business owners making fortunes off the imported women. In my opinion USFK is probably going to keep things as quiet with the business owners as possible to ensure that the USFK transformation plan to consolidate at Camp Humphreys goes off without any more delays, which may be a wise course of action. However, once the relocation is complete USFK should definitely look at changing the ville culture in Korea because both Korea and the US should be embarrassed that such a system that is currently in place in the ville still exists.

I share his vision and I hope higher-ups will find a way to make the new Camp Humphreys a better place. We don't need Tongduchon Lite.
Now, I would be remiss if I didn't qualify this story by pointing out that USFK-related prostitution is just one small piece of a much larger puzzle that is South Korea's sex industry. If one were to read the works of activist researchers like Katharine S. Moon and Sex Among Allies, one could easily get the impression that USFK-related prostitution were all there is, when it is unfair to bash just USFK and its personnel for what is a far-reaching phenomenon.
Indeed, that would be a mistake. While I question the veracity of studies like those of the Korea Women's Development Institute that say the "sex trade" accounts for up to four or five percent of GDP*, there is no doubt that it is a widespread and highly problematic practice in mainstream South Korean culture.
* I can't find the source right now (it's something I read off-line and am having trouble finding online), but the measures used by activist think tanks when analyzing South Korea's sex trade sometimes include even the non-sex-related economic activities of the establishments where sex is sold or indirectly available. Since sex services are often embedded in (and available through) legitimate businesses, like restaurants, bars, motels, and websites, the entire non-sex activities of these businesses — which might drastically overshadow the sex services — can be lumped in with the sex services. Thus the cost of the alcohol or the food served in a room salon, for example, becomes calculated into the sex industry statistics, inflating their portion of GDP and making the problem seem bigger. Perhaps this is a legitimate economic approach, since those who make money from the selling of sex are making money from the food and drink, too, but for those focused on helping the women themselves, it distorts the extent of the problem, almost to the point of sensationalization.
on September 23, 2009