Japanese nationalist "Go back to Korea" video from Tsushima

By now you may have seen the YouTube video of Japanese nationalists holding up flags and screaming at Korean tourists who are arriving at and, later, leaving the port at Tsushima (対馬), the part of Japanese territory closest to South Korea.
Indeed, this isolated island grouping is so close to Pusan that it can be seen on a clear day (and Pusan may be closer to Tsushima than it is to nearby Taegu). A two-hour boat ride from Pusan makes it the easiest Japanese territory to get to, and Tsushima officials themselves have tried to exploit this proximity, promoting their island as a great place for South Koreans to own a second home and get away from it all for some fishing, golf, or what have you. 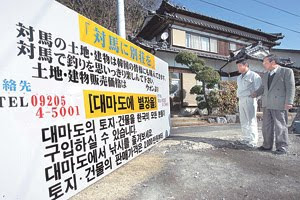 [right: According to a 2006 article in the Chosun Ilbo, Tsushima officials were promoting investment opportunities for Koreans on the island, including shops and "second homes."]
Just as with those in South Korea who take things like the political wrangling over Tokto/Takeshima, right-wing Japanese whitewashing of history textbooks, attitudes and apologies regarding the so-called "Comfort Women," and other testy issues that and use them to promote anti-Japanese sentiment and animosity, it's important to see this group (listed at YouTube as Zaitokukai And Sinpu, which might be Shimpu), and understand them for the fringe group that they are.
I watched the video with "M," a native-speaking Japanese student here. Paraphrased by "M," these are some of the things that were screamed at the South Koreans disembarking and embarking in Tsushima:
Okay, my glib side comments aside, this is serious for several reasons, but it ultimately should not be made a big deal out of. Like any hate group (and I'm looking at you, Anti-English Spectrum), they should be watched. But ultimately, how much do they represent Japan?
As I wrote here, this is vulgar nationalism, but these people are probably not particularly representative of the average Japanese. "M," for one, was quite shocked and dismayed that such groups exist in Japan. (Similarly, she was unaware of such xenophobic publications as these which got a lot of attention in the blogosphere in the past.)
Imagine how South Korean citizens would like it if the whole world (or just Japan) saw Korea through the prism of the finger choppers or the chinboista subway propagandists?
In fact, rather than thinking that Japanese in general are full of seething hate toward Koreans, the learning moment I hope the South Korean public will take from this is that vitriolic rhetoric and angry displays do no one any good.
UPDATE:
I had intended to add a paragraph on how the claims to Tsushima by some South Koreans (who call the islands Taemado [대마도/大馬島; aka Daema-do] in Korean), may be partly to blame for this. Citing historical connections from many centuries ago, the Republic of Korea may have briefly sought in the late 1940s and perhaps as early as 1950 to "reclaim" Tsushima.
While the ROK government makes no such official claim, there are civic groups and individuals that still press the Tsushima/Taemado claim. To some extent, this has been in retaliation for (and perhaps leverage against) Japan's actual official claim to Tokto/Takeshima.
And yes, that is stupid tit for tat. And perhaps this group today is doing the same. Except that South Korea's purported claims to Tsushima are not their only rant. They are a xenophobic bunch talking of foreigners as criminal miscreants that stinks of groups like AES.
And at any rate, one big difference between South Koreans concerns about Tokto/Takeshima and Japanese concerns about Tsushima/Taemado is that South Korea has no official claim to Tsushima, very unlike Japan's real and persistent claim to Tokto. That this non-issue is an issue for this group of nationalists is a very dubious thing indeed.
on September 22, 2009