How not to deal with stress 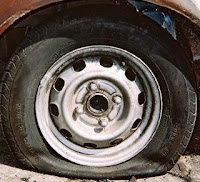 I'm liking KoreaBeat's new "theme" for their news stories: "How not to..."
Today's deals with a guy who lost his job and took it out on a bunch of tires. A hundred and sixty of them on eight vehicles. On several occasions. At a cost of thirty million won. Bastard.
As usual, we have the "please understand my situation and forgive me" defense:

A member of the police said, “after Mr. Lee was fired from the company he was working at two years ago he was unable to find work and became very stressed. He understands that what he did was criminal.”

Puh-leeze. That boils down to: “You must forgive me. I lost my job.”

Well, gee, Mister. That will make it even tougher for you to pay the 40K or 50K won for each tire you slashed (that's how much it costs me to replace mine).

If he still has no employment, put him to work in some grunt job until he earns back the money for the tires. And, of course, give that back to the people whose tires he slashed.

This kind of thing happened to me in the 1990s. At 3 a.m. I get a call from the local police telling me that my car’s electronic side mirror had been damaged (broken off its hinges, no small task) by some drunk guy, and I needed to come down — right then — to make a statement.

In a groggy state, I said, “Huh?” Really, what the hell am I going to say that they don’t already know: this guy damaged it and it’s my car.

Apparently this guy had damaged a whole bunch of cars up and down my street, and the police needed at least one of them to come in and make a statement so they could hold him or something. Honestly, I’m not really sure about that because I was half awake when this happened, plus I don't speak Korean perfectly, and my comprehension goes down somewhat in proportion to how blindsided I am by a situation.
It was several degrees below freezing outside so I went back to bed.

It cost me 90K won to replace that mirror. Drunken a-hole. [Korea-bashing version: Why are Koreans such drunken assholes?]

No good can come from answering your phone at 3 a.m. It’s either bad news from a cop, or it’s your mother who miscalculated the time difference (”Three a.m.? Are you sure?”)
The Hillary Clinton for President campaign convinced me I should not be head of state. For some reason there'd be a lot of 3 a.m. calls during a Kushibo administration, and I'd ended up bombing shit I wouldn't at, say, 11:30 (a.m. or p.m.). Especially if the calls were coming at me in Korean. 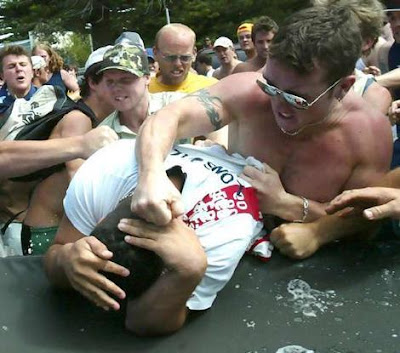 [above: This is how an ugly mob dealt with a guy who slashed the tires on at least thirty cars during an Obama rally in October 2008. I posted this, because this is how I felt the next day, standing in the cold, looking at my side mirror dangling from my passenger door.]
on September 20, 2009